Where strikes at Fairyhouse again to open chase account 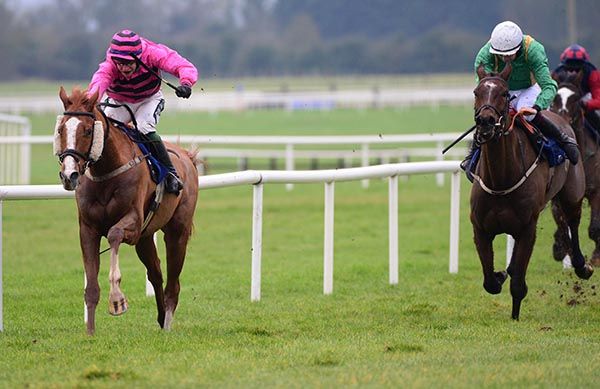 Now Where Or When scores from Bythesametoken
© Photo Healy Racing

Now Where Or When went one better on his second chase start when claiming the opening two-mile beginners chase at Fairyhouse this afternoon.

The Stuart Crawford-trained gelding had chased home easy winner Fakir D'alene on his first outing over fences at Down Royal on St Stephen's Day.

He went to post 7/2 joint-favourite today, in a race confined to horses rated 116 or less over hurdles, and tracked the leaders throughout.

JJ Slevin produced his mount to lead going to the final fence and he was always holding Bythesametoken on the run-in to record a two-length success.

The winner had also won his maiden hurdle at the track last April.

Slevin said afterwards:-“He’d a good run the first day in Down Royal and his jumping has sharpened up.

“It’s nice to see him winning over two miles as I think he’ll get a bit further.

“He operates well around here and is a grand horse to have. There might be a bit more fun to have with him in the spring up in trip.”