Wildman and Flynn combine for 80/1 winner with Ask Dee 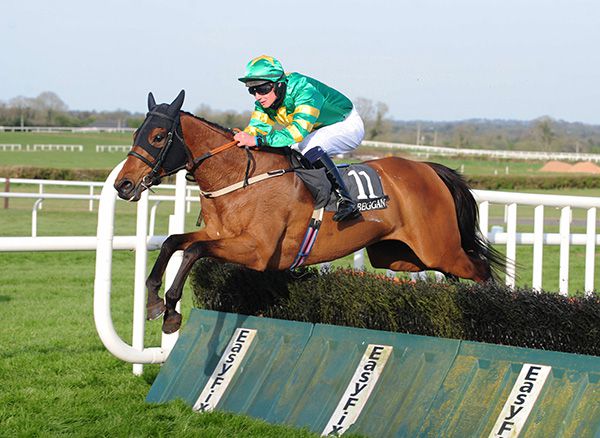 The 7Ib conditional was unfortunate when coming to grief on Humble Glory at the final flight at Clonmel at the start of the month, and he got a nice tune from Paul Flynn’s winner here.

Pre-race this was mainly centring around the big gamble, Land Jet. He was in trouble from some way out before eventually staying on well for second.

However he was in no way troubling six length scorer Ask Dee.

Wildman (first win in two years; had spells on the sidelines with injury) said: “Paul has always been very good to me and it’s great to ride a winner for him.

“I rode her work a few weeks ago and she worked very well but her form before today wasn’t great so we were hopeful rather than confident.

“She was plenty keen with me early but when she went in front she dropped the bit and I was able to get a breather into her.

“I thought jumping the second last that she might tie up as she hadn’t run for so long but Paul has done a great job with her.”

Flynn had earlier seen his Na Caith Tobac finish a close second at odds of 11/1 at Cork.

Addeybb set for Goodwood ahead of Champions Day

William Haggas is tuning up his two big guns for Champions Day, with Addeybb set to run at Goodwood on Wednesday should conditions allow.

Newbury’s Haynes, Hanson & Clark Conditions Stakes has an illustrious history, with some greats of the Turf on its roll of honour — and this year’s renewal looks sure to throw up a smart winner.