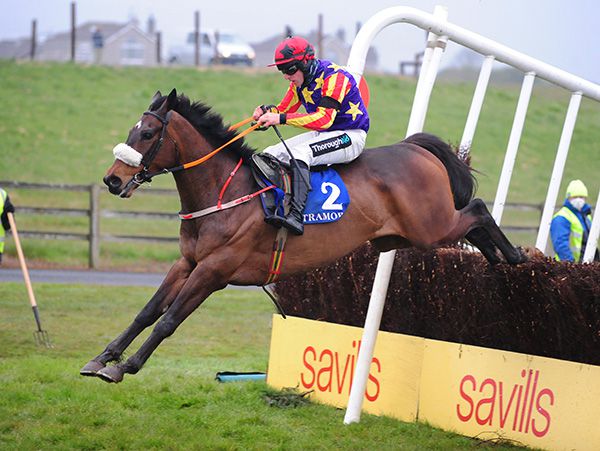 The even-money favourite led throughout and put in a display of jumping for Barry O'Neill.

There were only four horses in with a chance with a circuit to go as the field got stretched out by the front-running seven-year-old.

Wrong Direction made headway four out and attempted to chase the leader down after the second last.

However, Winged Leader was in no mood to relent and he put in another good leap at the last to saunter in by eight lengths. Wrong Direction put in a good shift for second at 11/5 and was 17 lengths clear of Templebredin (8/1).

Christie said: "The horses are in great form at the minute. They were probably a wee shade off over the winter time but now they are all really well and it showed today.

"He deserved it today. He has been enormously unlucky. People tend to forget that he is only seven. He was a bit like a young pup going out on the GAA pitch after playing brilliantly in the youth teams. Then he goes into the senior team and gets knocked about. For me this year has been his learning year and he will be an even better horse next year.

"He was very unlucky not to win in Thurles and the Tetratema probably came a wee bit too soon. The last day was a funny race because, even though it was two and a half miles, it turned out to be ten seconds slower than standard on that ground. It was a stop-start race and then a sprint at the finish and that is just not him.

"Today I said to Barry to just dictate it. I see him as a horse for some of the big races next year. We will see how he comes out of this. He might go to Stratford or he could go to Punchestown either. Punchestown is always very nice ground. He was second in Stratford as a novice and the horse who finished third that day was second in Topham last week.

"It took us four and a half hours to get here but it'll be an easier journey on the way up!"

The Stewards received a report from the Clerk of the Scales, Ms. Colleen Murphy, regarding the failure of Mr P.C. Bannon, rider of Save Us Avis, placed, fifth to weigh in after this race. Evidence was heard from the rider concerned, who stated that he presented at scales but understood that he was not required thinking that only the first four were required. Having considered the evidence, the Stewards used their powers under Rule 230 to disqualify Save Us Avis from fifth place. Furthermore, the Stewards found Mr. P. C. Bannon in breach of Rule 227 and having considered his record they suspended him for two race days.