Xebec makes all under McDonogh 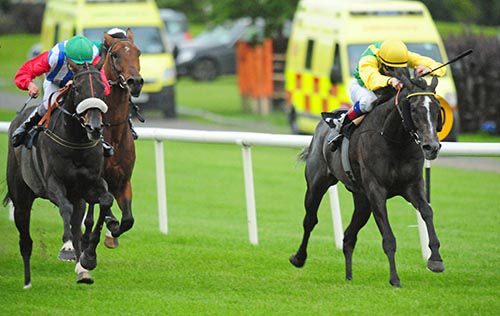 The consistent Xebec got a deserved second career success to his name as he took the Easy Clean Handicap under Declan McDonogh for his boss John Oxx.

A runner-up on his last two starts the son of Mizzen Mast was sent off a 7/1 chance this evening in the colours of Francois Vincent Fabre.

Sent straight to the front by McDonogh he was ridden from two furlongs out and kept on gamely inside the final furlong to score by half a length.

Here For The Craic (10/1) looked a big danger from a furlong out but he couldn't get by the winner and had to settle for second under Donnacha O'Brien for Keith Budds.

Intransive (13/2) was a further length and a quarter back under Pat Smullen for Dermot Weld while the favourite Boherbuoy (10/3 to 5/2) finished a disappointing sixth under Fran Berry for David Wachman.

John Oxx said afterwards: "I'm delighted he has won another race as he's been running really well in good handicaps recently and I'd have been annoyed with myself if he couldn't win another.

"He's a cracking horse, is tough, sound and versatile and can run on any distance, ground or track.

"He'll go for something similar next, around nine to 12 furlongs, and will probably go to the Autumn Sales then - I'm surprised the 'jumps' lads haven't been marching in looking for him already as he's a cracking looker with a great attitude."