Yanworth is 'crying out for a step up in trip' 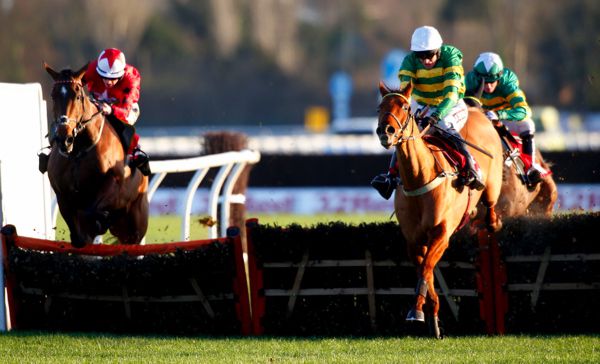 Yanworth (right)
© Photo Healy Racing
Alan King expects Yanworth to have no problems handling a step up in distance in the Ryanair Stayers Liverpool Hurdle at Aintree today.

The seven-year-old will bid to return to winning ways when tackling the extended three-mile trip for the first time in his career.

Sent off favourite for last month's Champion Hurdle at the Cheltenham Festival, the JP McManus-owned Yanworth, who was unbeaten in three previous starts this term, could only finish seventh.

King said: "It's his first time at the trip, but if you don't roll the dice you'll never know, and it did seem in the Champion that he was crying out for a step up in trip.

"He got outpaced running down the hill and then ran on up the straight, so we weren't too despondent, and he should be fine around this track.

"He schooled well on Monday."

It will also be a case of stepping into the unknown for impressive Coral Cup hero Supasundae.

Despite the seven-year-old not having raced over the trip before, trainer Jessica Harrington is optimistic the extra distance should be within his capabilities.

She said: "He is now rated 155 over hurdles in England so he would have top weight in a handicap and this seems to be the next step to take.

"It was a good performance at Cheltenham. He had been running in Graded races over in Ireland on soft ground which he doesn't like.

"He is in very good form and the ground will be good for him.

"We are stepping him up to three miles but that shouldn't be a problem for him given the way he stayed on at Cheltenham."

Warren Greatrex believes Cole Harden can build on a solid fourth in the Stayers' Hurdle at Cheltenham, on ground that will be more to his liking.

The Lambourn handler said: "Cole Harden is in good form. I thought he ran well at Cheltenham, and so did the handicapper as he has put him up 5lb.

"That was probably the best race he has run for 18 months. I've already said that he had his chance ruined at Cheltenham, though, because of the watering.

"This season I feel that he is pretty much back to his best and he has been running creditably all winter.

"Hopefully at Aintree he will go up a few of places from where he finished at Cheltenham.

"He has just been doing routine work since Cheltenham, but it is probably the best he has been in training as there have been no hiccups.

"He's fit and healthy so we will see what happens."

Oliver Sherwood hopes Grade Two-winning hurdler Puffin Billy still retains enough of his old ability on what will be his first start in 721 days.

The nine-year-old was last seen defeating leading Grand National contender The Last Samuri in a novice chase at Ayr in April 2015.

Sherwood said: "I wanted to run him last Sunday at Ascot but the ground was too quick.

"He has been a delicate horse to train over the last 18 months.

"It is just a question of getting him on the track and having a look at him and letting Leighton (Aspell) have a ride and tell me what I have got. He's in great order at home and is fit and ready to go.

"It is great to get him back. It has been a rough old season for me, but that is the life of a trainer."

Aux Ptits Soins stayed on for second on his return to hurdling in the Rendlesham at Haydock in February and takes his chance for trainer Paul Nicholls and owner John Hales.

Hales said: "He didn't jump well last time but we discovered he had a bit of a back problem. We think he might have got cast in his box the night before. We have had someone look at him and treat his back.

"He should be 100 per cent now and I expect a good run from him. The ground there won't be a problem for him."