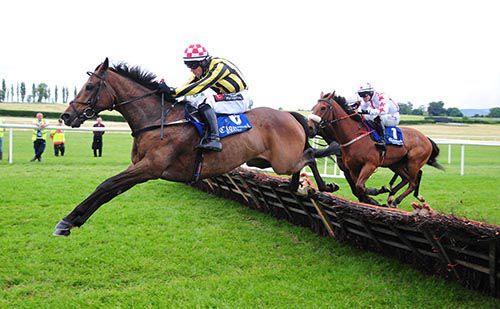 You Can't Catch Me will bid to continue his Clonmel love affair as he lines up in the Irish Stallion Farms EBF Handicap Hurdle at the Co Tipperary venue on Thursday.

The Kieran Purcell-trained eight-year-old has won four times at Powerstown Park, with his most recent success coming earlier this month in a two-mile-one-furlong maiden on the level.

He was returned 25-1 on that occasion, but is likely to go off a lot shorter now as he reverts to flights.

Zig Zag is an interesting contender in this two-mile-three-furlong heat. He was a respectable ninth in the Fred Winter at Cheltenham in March and was not disgraced on his last start in a competitive contest at Fairyhouse.

This four-year-old gelding is fitted with blinkers for the first time on his handicap debut, while Davy Russell is a significant jockey booking.

Russell has another live contender in the shape of Vanishing Point in the Clonacody (C & G) Maiden Hurdle.

The son of Pivotal finished second on his first two starts over hurdles, and he might be able to make the breakthrough now.

French import Lareena won't have to be a star to claim the opening Ancient East Mares Maiden Hurdle.

Trained by Willie Mullins, this four-year-old is in the same ownership as Grade One winner Whiteout and she is Ruby Walsh's only mount on the card.

Just five have been declared for the Clonmel Racecourse Supporters Club Guest Evening Hurdle, with impressive Down Royal victor Ornua likely to prove popular with punters.

The 130-rated Morgan looks a big danger, while the versatile five-time winner Prickly is another leading contender.

Tintown Robin, Bullowney, Rockey Storm and Shanroe Society appear the ones to focus on in the Sliabh Na Mban Handicap Hurdle.

Ladysingingtheblues, who was runner-up on her first two starts, is the clear form choice, but she has to contend with a half-sister to Hurricane Fly in the shape of the twice-raced Blixt, and a half-sister to Bobs Worth in newcomer Nicandra.