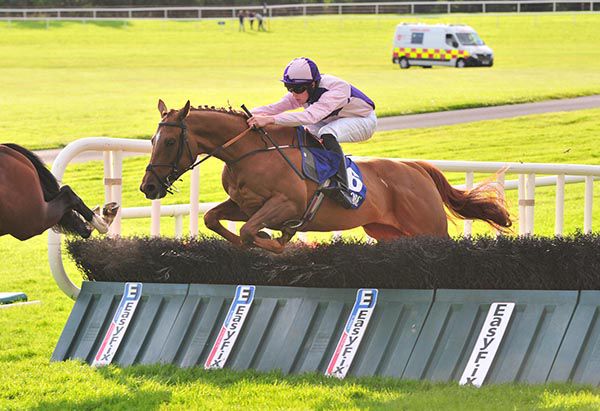 Zoffalee recorded his second success of the summer at Ballinrobe, as he claimed the feature Burleigh Accountancy Handicap Hurdle.

Trained by Andrew McNamara junior, the son of Zoffany was bought for 20,000 pounds at Tattersalls last October.

After some good efforts in defeat, he made the breakthrough over flights at Ballinrobe in May and was last seen finishing sixth in the Ladies Derby at the Curragh.

Sent off at 7/2 this evening, he was settled behind the leaders on the outer, taking closer order from three out.

He was ridden to challenge from the last and edged to the front inside the final 150 yards, going on to prevail by a neck under seven pound claimer Dillon Maxwell.

Humaniste was the one just denied, with this Edward O'Grady trained gelding returned at 11/2 (from 13/2) under Robbie Power.

Coral Blue was a further five lengths back in third, while Lever Du Soleil (5/4fav) was a disappointing fifth, fading tamely from the third last.

"It was a nice pot for him to win and he's entered at Tramore on Thursday," said McNamara who trains the winner for Andrew Heffernan.

"He might go there for the same money under a penalty. If he's okay in the morning that is.

"We were tempted to go to Galway with him.

"However after his run in the Ladies Derby we said we'd keep him for this good prize and he obviously likes Ballinrobe."

* The Irish Horseracing Regulatory Board Veterinary Officer examined Lever Du Soleil (FR), trained by Gavin Cromwell, at the request of the Stewards and reported the animal to be post race normal.

* The Stewards interviewed R.M. Power, rider of Humaniste, concerning his use of the whip in the latter stages of this race. Evidence was heard from the rider concerned. Having viewed a recording of the race and considered the evidence the Stewards found the rider in breach of Reg.10.3(g)(frequency) and having taken his record into account suspended him for 1 race day.