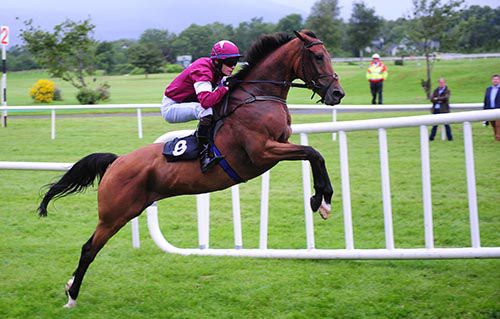 Sent off 20-1 following a disappointing outing over hurdles at Kilbeggan, Henry De Bromhead's gelding was soon dictating matters under David Mullins on his chasing return and never really looked like getting caught.

Sizing Solution followed him into the straight but the winner pulled nicely clear when asked to quicken and, after a fine leap at the last, crossed the line 10 lengths in front of Jim Dreaper's charge.

Silver Concorde justified 4-9 favouritism in the Celtic Steps At Killarney Racecourse (Q.R.) Race, but it was far from plain sailing for the 2014 Cheltenham Champion Bumper winner.

Dermot Weld's charge still had plenty to do entering the home straight and Finny Maguire pulled out all the stops to get him to the front well inside the final furlong, before holding the staying-on Spacious Sky by half a length.

The veteran Valours Minion sprang a 20-1 surprise in the MC Group Handicap Chase, staying on strongly for Mark Enright to beat As De Pique (11-4fav) by two and a half lengths.

Enright completed a quick-fire double in the finale as he made all on Shesaportrait (3-1jf) from Horendus Hulabaloo with five and a half lengths to spare.

The International Hotel Killarney Rated Race was the pick of the four Flat contests and it saw Vitally Important (4-1) bounce back to form.

Andy's Oliver's five-year-old failed to fire at the Curragh last month but was back on song as he came out on top in a thrilling finish with Cradle Mountain.

They were tough to split after sweeping past the pace-setting Maudlin Magdalen two furlongs out and the winner found the enough to get a neck in front at the line.

John Oxx's daughter of Pivotal had to dig deep to deny 15-8 favourite Boherbuoy but found enough in the dying strides to get up by a short head.