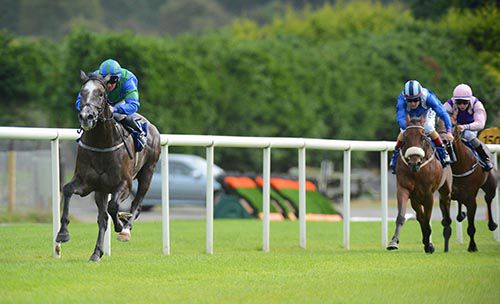 All Set To Go runs out an easy winner under Gary Carroll, with Wateed back in second
© Photo Healy Racing

All Set To Go showed his appreciation for having his sights lowered by landing the Irish Stallion Farms EBF Maiden at Roscommon.

Andy Oliver's grey was pitched into Listed company on the back of a promising debut behind Sir John Hawkins, but made no impact in the Naas heat won by another Ballydoyle youngster in Stubbs.

Given time to strengthen since then, the 6-1 chance took advantage of his inside draw by bouncing into a prominent position and he enjoyed a charmed run and strode five lengths clear of Wateed, with 5-4 favourite Lungarno Palace only third.

Jazz Girl was another all-the-way winner as she defied a 5lb penalty in the Roscommon Fillies Handicap to complete a double for Oliver.

Successful at Killarney last week, the 4-1 joint-favourite had the steadier of 10st 7lb but Connor King claimed 5lb and the crack apprentice judged the pace to perfection en route to a four-and-a-half-length defeat of Cin Cin.

There was a thrilling tussle for the Irish Stallion Farms EBF Maiden over a mile and a half as 11-10 market leader Murphy's Delight fought off Ebaniya.

The latter, a well-related daughter of Irish Oaks heroine Ebadiyla and from the family of Gold Cup winners Enzeli and Estimate, headed her rival halfway down the straight but Murphy's Delight found a second wind and got back up by half a length.

Jembatt managed only fifth at the Curragh on Sunday but the outing didn't do him any harm as he ran out a length-and-a-quarter winner of the Bet Online At thetote.com Handicap as a 7-1 shot.

The pick of the jumping action was the Tote Mobile Betting Handicap, which went the way of 25-1 chance Big Generator, while Royal Run hadn't shown much in two previous visits to the racecourse but she had her sights lowered for the Four Roads Mares Maiden Hurdle and duly sprung a 66-1 shock.

Naas Racecourse are looking for members of the public to nominate their lockdown heroes. Anyone who went above and beyond during the lockdown can be nominated.