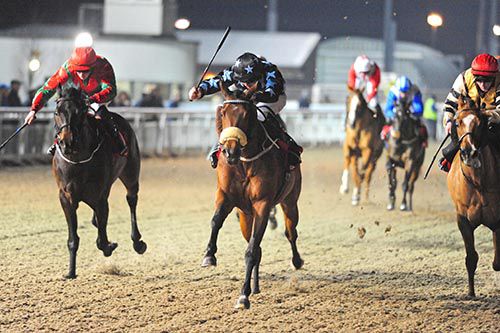 Duchessofflorence added to her value ahead of her retirement to the paddocks when claiming the first division of the mile-and-a-half handicap at Dundalk tonight.

Conor Hoban had to bide his time on the top-weight as she sought a passage in the straight.

The Michael Halford-trained mare got a clear run inside the final furlong to gain a length success over Asian Wing.

The 11/2 winner was recording her second career success having also scored at the track in November.

“She didn’t have a great draw tonight but she’s had worse,” said Halford.

“She’s a genuine filly and in that grade she’s able to carry the weight as she’s a big strong filly.

“She’ll be covered in the spring so we’ll see if we give her another try now that she has her head in front a couple of times.

“She picked up well. A couple of nights she had bad draws and found herself with a bit too much to do after they went steady.

“Those races are so competitive and you need them to fall right. Tonight they went a nice even gallop and that helped.

“He had to wait for a gap but after going that gallop he was confident it would come whereas other nights he found himself out the back turning in and the ones in front were gone.

“She’s fine at ten furlongs but I’d say the step up to a mile-and-a-half didn’t do her any harm either.

“We might give her another crack before she is covered.”