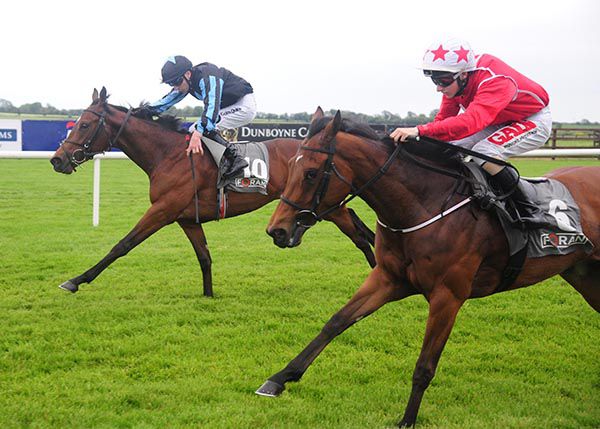 Declan McDonogh completed a memorable double at Fairyhouse today as the new father landed the Foran Equine Irish EBF Auction Maiden with another newcomer, Law Breaker, a day after his wife Eimear gave birth to their first child named Poppy.

Law Breaker, a son of Lawman, raced in rear for much of the trip before making strong headway in the home straight. McDonogh won the opener with fast-finishing Esprit De Lumiere and again conjured a terrific finish from Law Breaker who edged ahead close home for a head win over Laurel Grove.

Law Breaker's 33/1 win had winning trainer Edward O'Grady scratching his head as he reported “I can’t recall the last two-year-old winner I had!”

The winning trainer/breeder added “it was the usual story in that I couldn’t really get a bid for him at the sales. I thought he was a nice colt and the fact that we bred him is a big bonus. I don’t know where he’s going to go from here.

“It’s his first run and he can only get better.

“He did a bit of work up the Curragh the other day and he went quite nicely. He’s a really hardy, gentleman colt with his heart in the right place.”

O'Grady's previous two year old winner was with King Sancho, 26 years ago in July 1993 at Down Royal. That winner was steered to victory by Champion Jockey Michael Kinane in a time when O'Grady was scaling down his flat operation.

Irish EBF Barrier Trials to resume at Dundalk on July 29

Irish Thoroughbred Marketing, with the backing of the Irish European Breeders’ Fund and the Irish Horseracing Regulatory Board, is resuming Barrier Trials for unraced two-year-old and three-year-old horses at Dundalk Stadium on Wednesday July 29.

York and the Juddmonte a possibility for Benbatl

Saeed bin Suroor’s stable star Benbatl is back in training ahead of a return to action later this summer.