Wilderness pops up in the last for Murtagh at 20/1 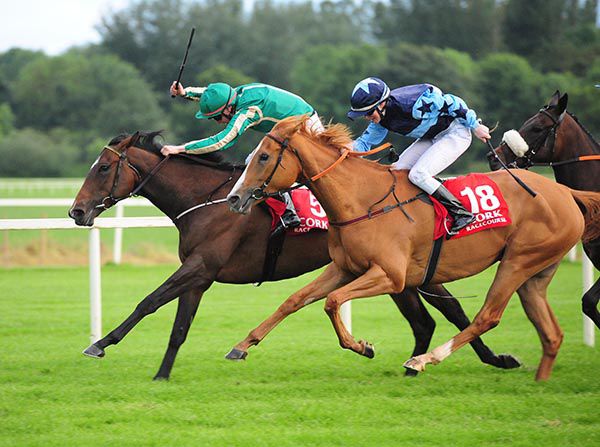 After sending out fourth, third and second placers earlier in the evening Johnny Murtagh made the breakthrough late as in the finale at Cork his Wilderness popped up at odds of 20/1 in division two of the Gina & The Champions Play July 12th Handicap.

Shane B Kelly was aboard the Cityscape four-year-old and the filly shed her maiden tag at the 8th time of asking.

It was exciting between Wilderness and Hidden Spark from over a furlong out but the former eventually prevailed by half a length.

"She is big and had a lot of soundness issues. This year she hasn't shown us much but she is a big girl and is improving with every run and maybe she is just getting fit," said Murtagh.

"She is a low grader but hopefully there is another one in her.

"Sheikh Fahad had her after her breeze-up but she had a lot of soundness issues and he gave her to me.

A.C. Persse, rider of Light Breeze, trained by Joseph Patrick O'Brien, reported to the Stewards' Secretaries that his mount got no luck in running.

The Stewards enquired into an incident the closing stages involving Serefeli, ridden by W.J. Lee, placed third, Wilderness (GB), ridden by S.B. Kelly, placed first and Hidden Spark, ridden by D.N. Curran, placed second, where it appeared Serefeli ran short of room. Evidence was heard from the riders concerned. Having viewed the recording of the race and considered the evidence, the Stewards were of the opinion that S.B. Kelly was in breach of Rule 214 in that he had ridden carelessly and having considered his record, they suspended him for 1 raceday. Mr Steve McDonogh, Acting Steward, was not present for this enquiry.