Free Solo all the way for Foley 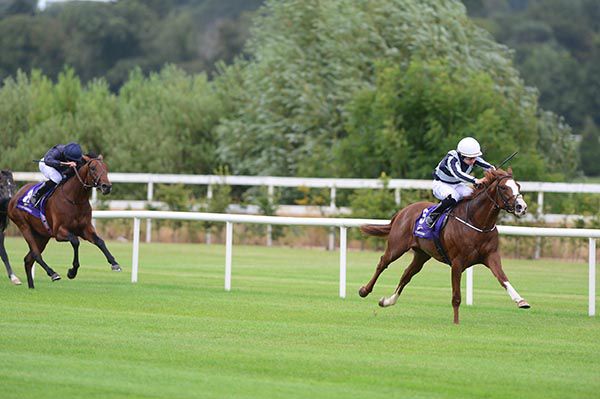 Shane Foley kept it simple again in the Frank Conroy Irish EBF Maiden, race two at Leopardstown, as he made all on Free Solo (4/1) and won by five lengths.

The Showcasing two-year-old, third at Naas on debut, stretched away from the furlong marker to lead home a trio of Ballydoyle debutants headed by Cabot Hills (13/2) in second, with a short head back to Yankee Stadium (4/1) in third.

The winning trainer Jessica Harrington, like her jockey completing a quick double, said : "Finally I got a colt to win. He was very good.

“He learned a lot in Naas where he was coming home. He was just like a baby at Naas, he jumped out and stopped rather than jumping out and going.

“Today he was just a different horse. He'll improve with racing.

“He's got some fancy entries and he'll probably go for the seven-and-a-half furlong Listed race at Tipperary.

“He loves that good ground. He got the mile easy. He got an easy lead in front and he had the experience so it stood to him.”