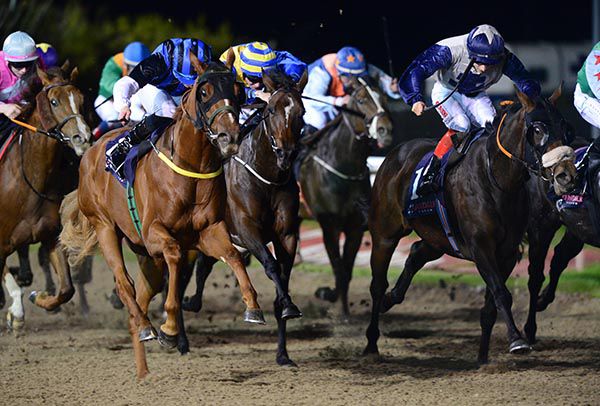 The race to be Champion Apprentice is as finely poised as the battle for the senior crown, and Oisin Orr drew level with Andrew Slattery on 37 winners apiece as Buzz Killington (8/1, from 10s on course) came home well to take the Christmas Nights At Dundalk Stadium Apprentice Handicap (Div 1).

The unexposed winner, in first-time blinkers, had caught the eye in a few sprint maidens, before disappointing on his first foray into handicap company at the Curragh.

He needed plenty of stoking from his jockey, but got the trip well to beat Slattery’s mount Fascinating Spirit (8/1) by half a length.

There was a further length back to third place dead-heaters Al Batal (12/1) and Crest Of A Wave (8/1), while the 11/4 favourite Mulzaam finished sixth.

“I'd say the blinkers just woke him up a little bit. He even raced lazy there, said winning trainer Noel Meade.

“He ran no race at all in the Curragh in his first handicap. Maybe the ground was a bit easier that day and I'd say he just likes the better ground.

“He is a bit laid back. I wouldn't be surprised if another step up in trip mightn't do him any harm. He's only doing enough.

“I'll have to talk to his owner and see what the plan is.”