Harrington horses excelling on all fronts 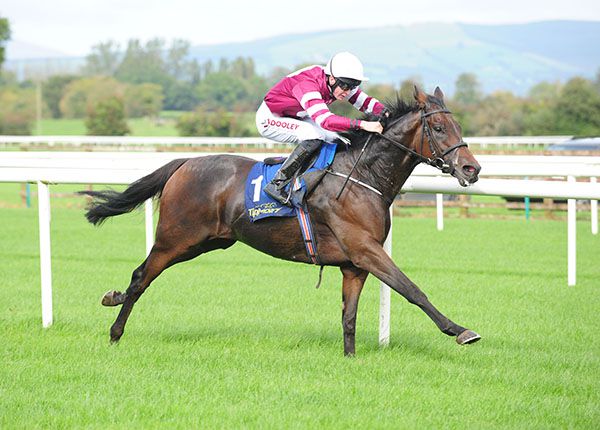 After Albigna’s Prix Marcel Boussac heroics over at ParisLongchamp the Jessica Harrington team kept home fires burning at Tipperary as the stable’s Onlyhuman defied his top-weight burden in the TheTote.com Handicap.

Under Tom Madden Onlyhuman left most of his rivals for dead on the far-side from over a furlong out.

Habitual slow starter Dare To Flare came home well to be a three length runner-up at the line.

"He was impressive and loves that ground. He is different gravy on that ground although I was worried with top weight but he seems well able to carry it," said Madden.

"After that handicaps are probably out the window as he probably won too well but he is a nice horse going forward on that ground.

"It is great to be a small part of a big team (Harrington's)."

The Stewards requested a report from Mrs Jessica Harrington, trainer as to the apparent improvement in form of Onlyhuman, placed first, as compared with its recent form. Mr. Richard Galway, authorised representative for Mrs. Jessica Harrington stated that the soft ground today had brought about the improvement in form when compared to the horses previous run. Having considered the evidence the Stewards noted the explanation given.

Sacred Bridge confirmed herself to be a top-drawer juvenile when keeping her unbeaten record intact in the €300,000 Irish EBF Ballyhane Stakes (Median Auction Race) in Naas.

Jon Ess outbattled Ricky Langford close home in the Fermoy Handicap Hurdle at Cork but that only told half the story.

Andrew Slattery's Dashing Shirocco built on the promise of a fourth place on debut to take the Mallow Mares Maiden Hurdle in Cork.