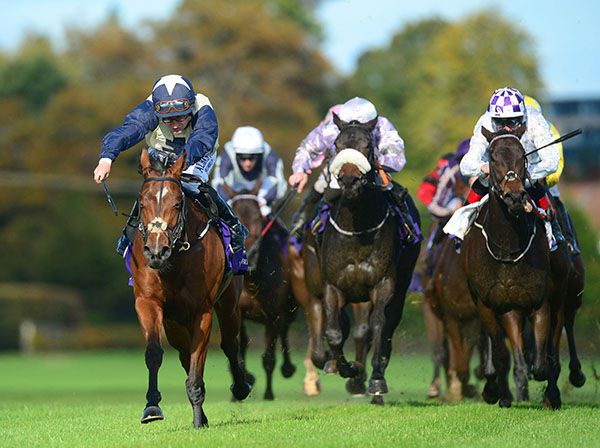 Favourite backers had few worries as Celestial Object (13/8) led after a couple of furlongs and asserted early in the straight, before running on to score comfortably in the opening Irish Stallion Farms EBF Fillies’ Maiden.

The Galileo filly, whose dam Sea Siren was a triple Grade One-winning sprinter in Australia, won by three and three quarter lengths from Soineanta (9/2), with another neck back to the third home Molly T (9/1).

Shane Foley’s mount was a 21st individual 2-y-o winner of the season for Jessica Harrington, and had won a Barrier Trial at Naas before running third on her ‘official’ debut at Gowran, followed by a close-up fifth in a Listed race at the Curragh.

“I think the only other winner I've had by Galileo is Supasundae!” said winning trainer Jessica Harrington.

“She's not very big but she's tough and hardy. All she wants to do is please you.

“She'll go home now and come back early in the spring. Shane said he's not certain that she wants that very soft ground. She won a barrier trial on good ground and loved it.

“We'll see next spring and I'd say we'll be looking at stakes company the way she won there and the way she's bred.”