Queally team on the mark again in 2020 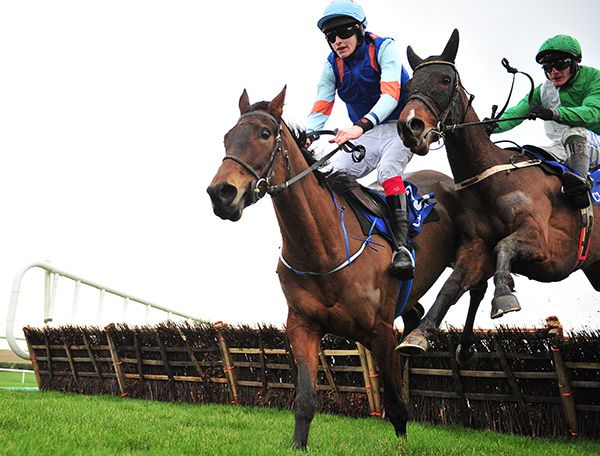 Uisce Solas (9/4 into 6/4) beat Getaway Gorgeous (8/13 out to 9/10) and survived a steward’s enquiry before being confirmed victorious in the Kilsheelan (Mares) Maiden Hurdle at Clonmel.

The Liam Quinlan-ridden Uisce Solas put her experience to good use from the front but hurdle first-timer Getaway Gorgeous came there with every chance from two out.

With a hood on for the initial occasion, Getaway Gorgeous jumped into her opponent at the final flight, and had to switch around the Declan Queally-trained Uisce Solas when that one went for the near side rail from the back of the last.

Three parts of a length split them and there was a gap of twelve lengths back to Gills Pet back in third.

It's been a good start to 2020 for the Queally team. Their Owenacurra Lass won under Tom at Tramore on New Year's Day, whilst the stable's Fenno's Storm was narrowly denied at Ballindenisk point-to-point last Sunday.

T. Ryan, rider of Krickett trained by W.J.Austin, reported to the Clerk of Scales that his mount made a few jumping mistakes during this race.

The Stewards enquired into possible interference from the second last hurdle to the winning post involving Getaway Gorgeous, ridden by P. Townend, placed second and Uisce Solas, ridden by L. Quinlan, placed first, where it appeared that Getaway Gorgeous ran short of room after the final hurdle and had to check.

Having viewed the recording of the race and considered the evidence, the Stewards were satisfied that the winner did not improve his placing by causing interference and made no alteration to the Judges placings.

They did, however,find that L. Quinlan was in breach of Rule 214 by riding carelessly and suspended him for 2 racedays having taken his previous record into consideration.

Furthermore they informed the trainer that Golden Ode would be ineligible to run until the error is corrected to the satisfaction of the IHRB Veterinary Officer and any period of suspension imposed has expired.