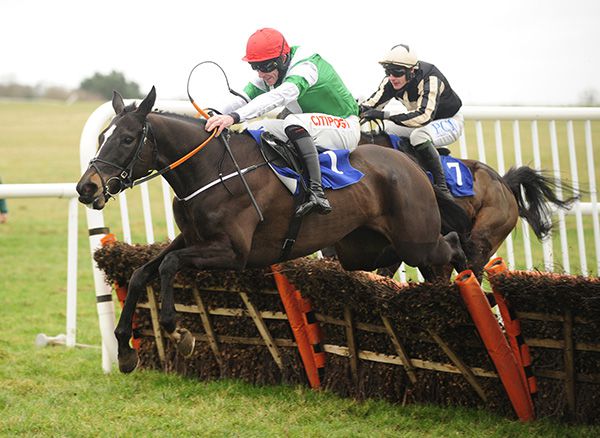 Gordon Elliott doesn't need reminding that he leads the Trainers' Championship but the Gold Cup and Grand National winner edged a little further ahead with a treble at Thurles today, coming with his Ard Abhainn in the featured Listed Irish Stallion Farms EBF Boreen Belle (Mares) Novice Hurdle.

Today's feature race is named after the Thurles Racecourse-owned Molony family's Boreen Belle, an Aintree festival winner in 1989, whose trainer and local vet Bill Harney passed away on December 29.

In the race Ard Abhainn, a daughter of Jeremy, raced with the leaders under jockey Davy Russell, and while she came under pressure with three furlongs to race, stayed on well to eventually score a three lengths winner from the Willie Mullins trained Rebel Og.

Elliott previously declared he had “no chance” in any Trainers' Championships and while he now side-steps that theme entirely, Paddy Power bookmakers nonetheless recently cut him to a 5/2 chance (from 4/1 at Christmas) to beat Mullins, who is currently the 1/4 favourite.

Elliott's treble moves him E350,000 clear of Mullins and following Ard Abhainn's win, stated “I thought the trip was a bit short for her and she missed the third last but Davy was happy with her. She is honest and stays galloping.

“We'll see how she is and I'd say the further she goes the better she'll be.

“She is a valuable broodmare now, has been Listed placed and is now a Listed winner and will definitely be going to Cheltenham, probably for the Mares' Novice Hurdle.”

Following on from Wednesday’s announcement by the Board of Horse Racing Ireland that the 2019/2020 National Hunt season was to be cut short and that the Fairyhouse Easter Festival and the Punchestown Festival would not be rescheduled, the champions for the season have been confirmed.