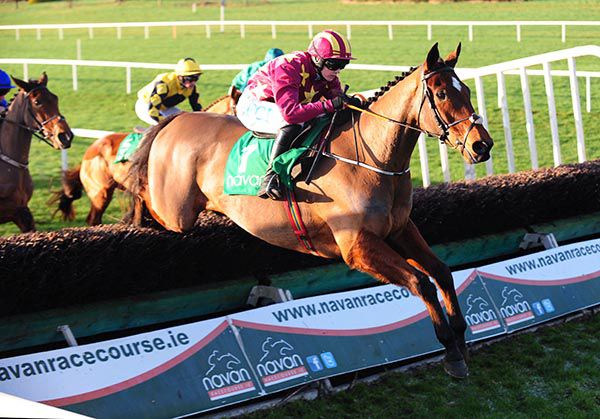 She kept the former point-to-point winner wide on the front end, and the Beat Hollow gelding seemed to really enjoy himself jumping well.

Upped to three miles from the two and a half he contested when second on chase debut behind Laurina at Gowran, Minella Indo had to work from the last to see off 7/1 second favourite Captain Cj by a length and a half. First Approach ended up six lengths back in third.

"I'm delighted with that and it was nice to see him tough it out. Rachael said he took a little blow after the second last and hopefully he should improve for it," said de Bromhead.

"I'm delighted to have it out of the way and as soon as we scratched from Leopardstown (at Christmas) this race was the plan. I wanted give him a test over three miles as he needs it. He is so laid back at home and has done a lot of work since Gowran and still he'd give you the fright there between the last two (fences).

"It was nice to see him get stuck in after the last and go on and stay on at it. I thought he was good.

"It's job done and he'll go straight to Cheltenham for the RSA Chase next. He won't be entered in the National Hunt Chase."