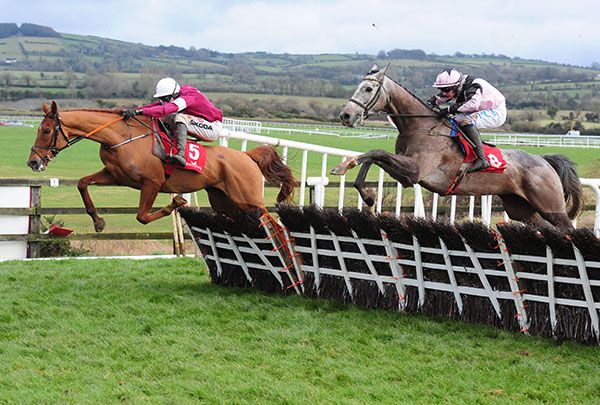 Run Wild Fred proved too strong for hotpot Lord Royal when running out a convincing winner of the Surehaul Mercedes-Benz Novice Hurdle at Punchestown.

The Gordon Elliott-trained gelding had taken a heavy fall at Thurles last time, when under pressure and joined by eventual winner Monkfish two from home.

Gigginstown's Shantou gelding showed no ill effects as he bounced back to land today's Grade 3 prize.

Having tracked the leaders Mark Walsh let his mount jump into the lead four from home and he kicked a couple of lengths clear turning for home in the three-mile contest.

8/11 Lord Royal toiled in his wake and could only get within a length-and-three-quarters of the 14/1 winner at the line.

Elliott said:- “He’s a grand big galloping horse. Mark gave him a great ride and kicked at the right time. He won snug enough as he half jammed on at the last.

“He’s an unassuming type of horse and it was a good performance. He was in all the handicaps at Cheltenham but that won’t do him any good!

“There is plenty of prize-money at home as well so we’ll see what we will do.”

Boylesports introduced the winner at 10/1 for the Albert Bartlett while Paddy Power go 16/1 from 40/1 for the same race.

As a result of his win Paddy Power cut Monkfish into 5/1 from 6/1 for the Albert Bartlett.