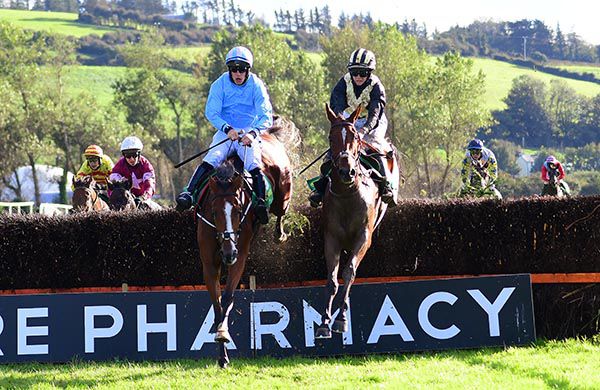 There was a lot less jumping to be done than is usually the case in the Brandon Hotel Beginners’ Chase with the two fences in the home straight omitted due to the low-lying sun. Stacks Mountain (5/2) tracked Pilbara (7/1) throughout before leading away from the final fence jumped (normally the third-last).

From there Rachael Blackmore (a double after Popong in the mares’ chase) kept him going to beat the latter by eight lengths, with the 13/8 favourite Star Max unable to land a blow back in third.

The winner, a dual hurdles winner by Black Sam Bellamy, had finished third on his first completed start over fences at Killarney last month having unseated rider on his chase debut at Roscommon.

Winning trainer Henry de Bromhead, also completing a double after Popong earlier in the afternoon, said: "I'm delighted with that. Obviously we were missing a few fences but I thought he jumped very well and went through the ground well so I'm very happy and Rachael was happy with him.

“We'll see how he comes out of it and see what we'll do then.

“He seems to appreciate a bit of ease in the ground and has really got his jumping together after the first day.

“I'm delighted for John Byrne. It's great to get one for him down here. Sadly he couldn't make it, he might be preparing for his impending marriage!”