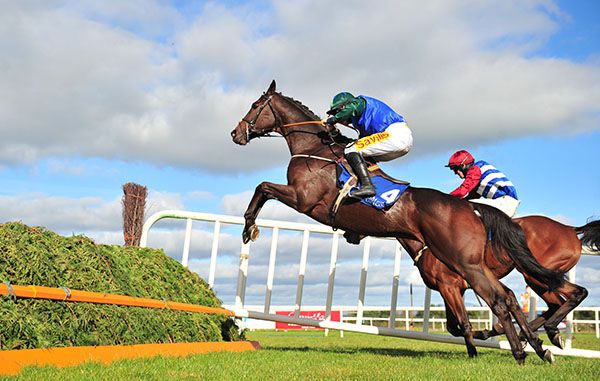 Visionman moves past Djingle at the last
© Photo Healy Racing

Flanagan filled-in for injured Keith Donoghue with an opening race win on the Matthew Smith trained Formal Order before doubling his score with on his scheduled ride Cast Mate in the second race.

Flanagan and Formal Order were the beneficiaries from leader Commandingpresence s fall in that opener and with Commandingpresence's jockey Rachael Blackmore subsequently stood down, Flanagan picked up the 'spare' on De Bromhead's Visionman.

Free-going front-runner Djingle s presence in the race elicited a cheery 'Djingle all the way' prediction from the Irish Examiner's on-course reporter Tommy Lyons, but in the race Visionman did eventually wear down Djingle jumping the last, and scored by four lengths.

Following the race De Bromhead reported “he jumped brilliant and Sean gave him a super ride. It is frustrating for Rachael but is great for Sean and I'm delighted for the Halsalls (owners).

“Rachael is a bit sore and is going to get checked out so hopefully she will be back soon.”

Regarding Visioman he added “it was hard to believe going up the back straight that he could pick up the leader Djingle but the pace they went you'd always hope it might happen.

“Our lad stuck at it really well and he is tipping away nicely, is improving with every run and Dylan (Robinson) was very good on him at Kilbeggan the last day.

“We rode him more forcefully as a novice but he seems to enjoy sitting in. He is great to jump and loves it.

“Today was the plan for the moment and we'll see what the handicapper thinks. We might give him a break and bring him back for the spring and could be one for the Topham (at Aintree).”