The Trix is to follow McLoughlin when the money is down 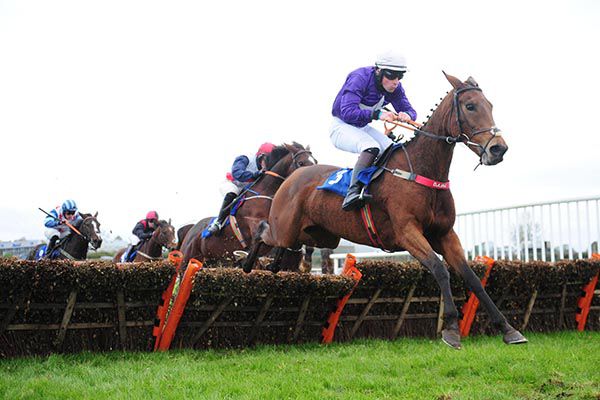 Trickey Trix (13/2 into 9/2) justified the confidence of her backers in the Premier County Mares Handicap Hurdle at Thurles.

A winner at Down Royal in August and second since at Clonmel, the successful daughter of Mahler here made every yard of the running to credit Dermot McLoughlin and Danny Hand with another October winner.

Trainer McLoughlin struck at Downpatrick on the 9th of the month with the gambled-on Laughing Trix, whilst jockey Hand won on the 2nd at Gowran aboard 33/1 shot Important Message for David Dunne.

After Trickey Trix beat Quarry Lil by four lengths McLoughlin said: "That's three times we've ridden her like that and she seems to enjoy herself in front and is game out. Danny said she keeps finding and finding.

"She can be a little bit tricky and stood at the start on her only chase run but is honest and will go back chasing at some stage. We'll look for something similar next.

"She is owned by Pat Macken, a retired butcher from Dunboyne."

The Stewards interviewed M.P. Fogarty, rider of Flamin Aimee, concerning his use of the whip in the closing stages of this race. Evidence was heard from the rider concerned. Having viewed a recording of the race and considered the evidence, the Stewards were satisfied that M.P. Fogarty was in breach of Regulation 10.3(g)(frequency). Having taken his previous record in this regard into account, the Stewards suspended M.P. Fogarty for 6 racedays.

B. Hayes, rider of Pat's Pearl trained by John C. McConnell, reported to the Clerk of Scales that his mount never travelled and was pulled up thereafter.

Envoi Allen has looked a natural over fences to date — but one of racing’s potential superstars faces arguably the stiffest test of his career at Punchestown on Sunday.

Eileendover took her unbeaten record to three with a hugely impressive victory in the Listed bumper at Market Rasen.

A third winner of the day for Gordon Elliott, and a second for owners Robcour, arrived in the finale at Fairyhouse as Gerri Colombe (8/13) absolutely blitzed his rivals by twenty four lengths and more.