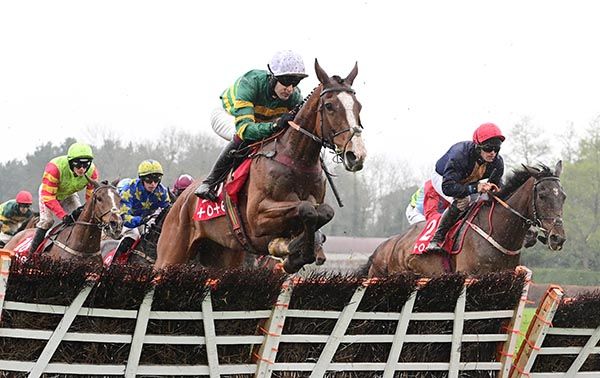 Second-favourite beat favourite in the 25-runner Tote-sponsored Grade B Handicap Hurdle as Camprond (4/1) provided Aidan Coleman (33) with his first winner in Ireland.

The Cheltenham Festival-winning rider, a native of County Cork but based in Britain for many years, went ‘down the paint’ on the Lope De Vega gelding who moved into fourth on the home turn.

Locally-trained outsider Bread And Butter made a bid for glory early in the straight but Coleman’s mount headed him at the last. Despite making a mistake at that final obstacle, the JP McManus-owned winner stayed on well to beat market leader Fastorslow by three lengths. Bread And Butter was another length and three quarters back in third with a further three lengths back to Adamantly Chosen in fourth.

The six-year-old, a Grade 2 winner at Chepstow in October, was turning around form with Coral Cup runner-up Fastorslow having been over ten lengths adrift of that horse at Cheltenham.

Winning trainer Philip Hobbs said: "We were a little bit unlucky at Cheltenham because we had a lot of rain on the day and it was heavy ground.

“It wasn't as bad here by any means and he wants better ground really.

“He didn't jump quite as well today as he can but he didn't lose much momentum doing it. He's done really well.”

When asked if he could go chasing next season he added:- “He could do either, I wouldn't think we'd make a plan at this stage. We'll see what happens next season.”