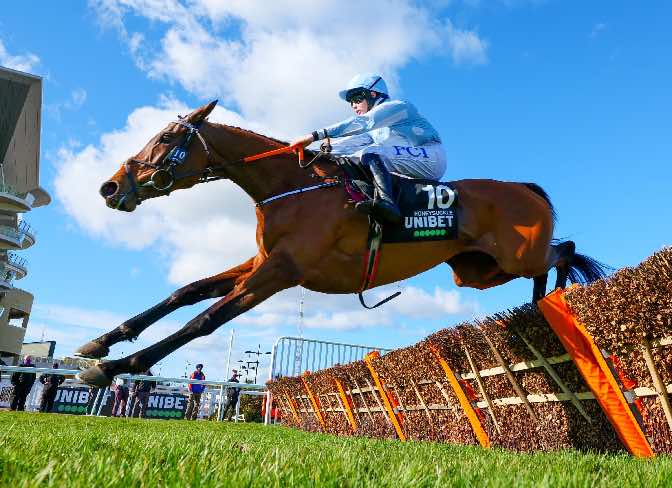 Punchestown racecourse has announced Paddy Power as the new sponsor of the Champion Hurdle at the Punchestown Festival as part of a three-year deal.

The Paddy Power Champion Hurdle is one of the highlights of the 2021 Punchestown Festival that takes place from Tuesday 27th April to Saturday 1st May. The jump season grand finale will potentially host many of the 23 Irish-trained winners from last week’s record-breaking Cheltenham Festival.

"It gets our juices going to be part of such a competitive festival, especially now in this new golden age of Irish jumps racing. We’ll plan to make it extra special for race fans too once we’re all back at the famous Co Kildare track.”

Honeysuckle, who could bid to join household names such as Buveur D’air, Faugheen, Hurricane Fly, Brave Inca, Hardy Eustace and of course Istabraq by winning the Paddy Power Champion Hurdle, kicked off a week to remember for trainer Henry de Bromhead and jockey Rachael Blackmore at Cheltenham last Tuesday and it would certainly be a fitting chapter to close her remarkable season if she were to line up at Punchestown next month.

“Honeysuckle certainly appears to be going from strength to strength and was brilliant in Cheltenham so it would be great to be able to go to Punchestown for the Paddy Power Champion Hurdle all being well,” trainer Henry de Brohmead said.

“I spoke to Peter Molony (owner representative) over the weekend and without saying for sure, we’d certainly be leaning towards Punchestown if we get the right signals between now and then.”

“She seems good, really well and we’re delighted with her. We’ll just let her settle back in and just start tipping away with her again. We’ll just have to see and get a feel for her over the coming weeks and she’ll tell us how she is. Each horse is different and there’s no set routine after a race, we’ll let her tell us. She is having a well-earned rest and we’ll pick things up again when she is ready.

“We also have Aspire Tower who will be aimed at the Paddy Power Champion Hurdle. He ran a blinder at Cheltenham to be fourth. We were delighted with him. He is only five but has made the transition from juvenile to open company very well and he will be aimed at Punchestown as well.”

Rachael Blackmore added: “Punchestown is always a fantastic festival to ride at and hopefully Henry’s team of horses can be in similar form to Cheltenham. We all very much looking forward to races like the Paddy Power Champion Hurdle.”