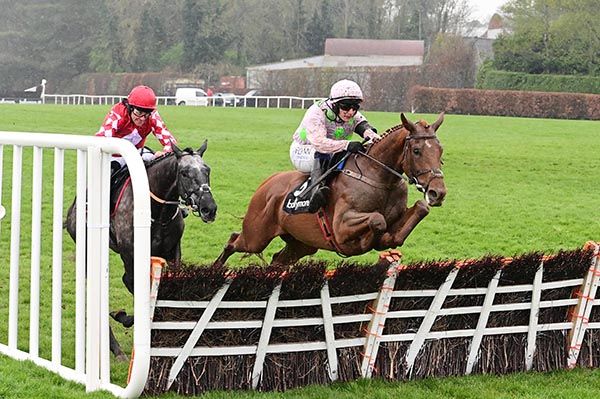 The 4/11 favourite Vauban was a smooth winner of the Ballymore Champion Four Year Old Hurdle to give Willie Mullins his ninth Grade One winner of the week at Punchestown.

Paul Townend’s mount sat second to old rival Fil Dor in a race where nothing else really counted and cruised past the hard-ridden leader on the run to the final flight. The Galiway gelding went on to score very readily for the champion trainer and jockey.

It was Vauban’s third Grade One of the campaign with the luckless Fil Dor filling the runner-up spot on each occasion.

At Leopardstown in February the winning margin was three lengths, it was two and a half in last month’s Triumph Hurdle and a facile four lengths on this occasion

“He did very well and Paul said he's only learning, he has very few races under his belt,” said Mullins.

“Paul said he's starting to get down and hurdle properly now. He settled in and changed gear when he wanted to.

“It was an automatic change of gear and he looks hugely exciting. He has serious gears and he's only learning to race.

“He only had a few races on the Flat and he's getting it together over hurdles now.

“We bought him before he won the Listed race in France, it's a thing we never do but we spotted him and asked the price and they gave it to us. They wanted to run him in the Listed race, we said okay and kept our fingers crossed.

“He got into awful trouble on the race and there was huge interest after that, I'm sure Rich could have turned over a neat profit.

“The Australians wanted him and he looked ideal for down there, maybe he'll end up down there some day. Maybe we'll have a tilt at the Melbourne Cup, not this year.

When it was put to him that he was a Champion Hurdle horse he added:- “He shaping up to be one.”