Start your free stable and have fun racing in free races!

Train your horse to peak fitness and performance.

Race your horse against other owners' horses.

3.43 Foreign languages could be taught in preschool and primary - Department

3.20 Three arrested after crime agency makes its biggest ever drugs seizure in North

Gallery - Best Pictures of the week

Henderson talks of his Cheltenham squad 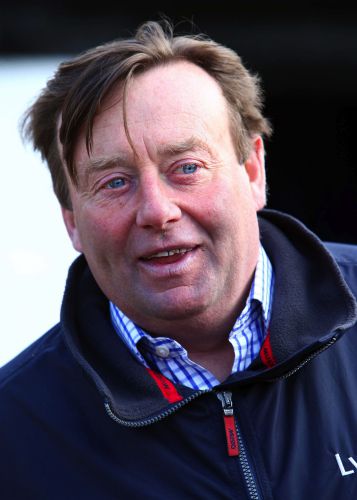 Nicky Henderson was the top trainer at Cheltenham last year with seven winners
(© Photo Healy Racing)
Nicky Henderson might publicly admit he does not expect to match last year's phenomenal haul of seven Cheltenham Festival winners, but a team of at least 35 from his Lambourn stable will be out doing their best.

These include virtually all of his returning heroes, such as Sprinter Sacre, Bobs Worth, Simonsig and Riverside Theatre as well as a former Betfred Cheltenham Gold Cup winner in Long Run, which explains why Henderson is long odds-on to be top trainer when the meeting begins in three weeks' time.

"What happened last year is unrepeatable. Maybe Paul (Nicholls) or Willie Mullins will have seven, but it has happened once to us, so it won't happen again," said the Festival's all-time leading trainer.

"You would settle for one - anything that comes your way is gratefully received. The best thing is if you can find one winner on the opening day. It doesn't make the horses run faster but it gives everyone confidence."

If betting is taken literally, that one winner will surely be Sprinter Sacre, who could be sent off the hottest favourite at the fixture since Arkle won the 1966 Gold Cup.

Henderson, who had opened his stable for a media morning on Monday, became practically doe-eyed when asked to pose with the Sportingbet.com Queen Mother Champion Chase-bound gelding, who has hardly been tested in seven starts over fences.

"I think he (Sprinter Sacre) is as good looking a horse as you'll ever see. Bobs Worth is no oil painting, he's just a nice horse, but with Sprinter Sacre it's a different ball game."

"Simonsig and Sprinter Sacre are two of the best work horses I've ever seen," Henderson said.

"He has a lot of natural talent and it's just easy for him. We won't be complacent, but he loves doing it. If you enjoy what you are doing, you can do it well."

While Simonsig, hot favourite to follow in Sprinter Sacre's footsteps by taking the Arkle Trophy, could be joined by his stablemate in having a preparatory schooling session with the renowned Yogi Breisner, a handful of the other leading lights are to have a racecourse gallop at Kempton on Saturday.

These include the Gold Cup hopes Long Run and Bobs Worth, who have not appeared in recent trials, as well as Triumph Hurdle prospect Rolling Star.

Defending Ryanair champion Riverside Theatre - back after being diagnosed with ulcers - and Binocular, the former Champion Hurdle winner, are others who will have a spin on the turf.

After managing a one-two in the race named after his father, the Johnny Henderson Grand Annual Chase, the trainer named his five probable runners as Tanks For That, Anquetta, French Opera, Petit Robin and Kid Cassidy.

Finian's Rainbow is set to defend his Champion Chase title against Sprinter Sacre despite a laboured appearance at Ascot over the weekend.

Henderson said: "You'd have to admit he was disappointing but Barry (Geraghty) is adamant he doesn't go in soft ground. I think everything points to going back to two (miles)."

Oscar Whisky was confirmed, as owner Dai Walters had suggested, for the Ladbrokes World Hurdle after a much improved attempt at a longer distance when just beaten by Reve De Sivola in the Cleeve Hurdle.

"Our main objective had been to win a third Aintree Hurdle but Big Buck's not being there has opened it up," he said.

"That has invited us there, and we'll go."

While Grandouet, set for a later gallop after recovering from a minor issue, and Kingwell Hurdle runner-up Khyber Kim join Binocular in the Stan James Champion Hurdle, Henderson effectively ruled out My Tent Or Yours.

A facile winner of the Betfair Hurdle, JP McManus' youngster will revert to the William Hill Supreme Novices' Hurdle.

"He's very good and he goes for the Supreme," he said.

"I have been speaking to everyone and that is the plan, I believe. I know JP has Jezki in the Supreme as well, but don't forget he's got Binocular in the Champion and we're happy with him."

Virtually all the team have competed their racing trials ahead of Cheltenham, one or two handicappers aside, but Saturday could see last-ditch Triumph auditions for Vasco Du Ronceray and Courtesy Call.

"They are two who really need a run on better ground and could go for the Adonis at Kempton," Henderson said.

A decision on whether yet another smart novice, Chatterbox, heads to Cheltenham has not been made.