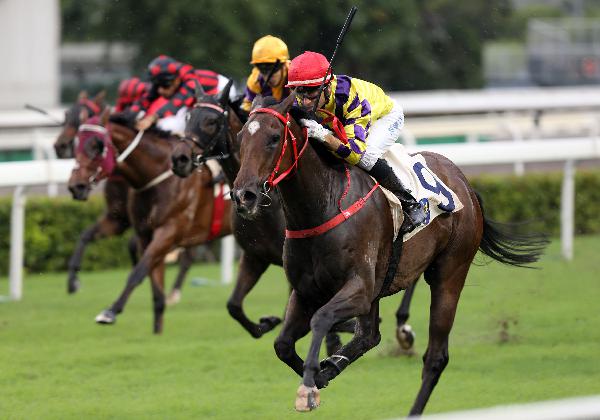 Champion’s Way steps out on the road to the BMW Hong Kong Derby in Saturday’s Class 1 Panasonic Cup Handicap (1400m), aiming to build on an impressive first season in which he set a high bar for his classic-bound peers.

“He did a remarkable job as a three-year-old and he got to a very high figure doing that,” Size said.

“He’ll go on the Derby trail and he’ll follow those races unless he proves that he can't go any further than a mile,” the 11-time champion trainer said.

“There’s not much on for him in December so he’ll have at least this one run in November so he’s done some work and hasn't had too much time away from racing. He’ll go in the first race of the four-year-old series (the Classic Mile) in January.”

Champion’s Way faces a tough test under Joao Moreira for his first start since June: the Hinchinbrook gelding must shoulder top-weight of 133lb against smart rivals.

Size knows Champion’s Way will not have it easy if he is to give the handler a fifth win in the race.

“To come back and run up to that mark (108) will be a good effort. He seems ok, he’s had a couple of trials; he’s healthy and well, and sound; and I think he can go to the races and run well,” Size said.

“He looked like a pretty smart horse when he started to race but after a few runs he gave the impression that he actually wasn’t a sprinter and that he’d appreciate a bit more distance. That’s what he did and he went on with it.”

Champion’s Way’s only defeat came when second to stablemate Red Warrior in a 1600m Class 2 last May. The former conceded 4lb to the latter on that occasion: this time the concession is 7lb.

“Red Warrior’s got a bit of a feather in his cap there,” Size said. “He’s still getting ready - he’s not quite fit enough. He looks in good shape but I think he’ll need racing to get him to his best.”

The handler has five runners in the 13-strong line-up, with the admirable Time To Celebrate (132lb) making his seasonal return and the race-fit pair of Gunnison (127lb) and Nothingilikemore (132lb) looking to regain the winning thread.

“Time To Celebrate’s in tremendous form,” Size said. “When you see him at the races he looks fantastic but he’s on 107 and that might be all he’s capable of. But his health and wellbeing is quite good.

“Gunnison might struggle with the 1400 (metres) but it shouldn’t be a terribly fast-run race so he’ll get comfortable at some stage. He’s on an awkward mark also.”

Two years ago, Nothingilikemore was heading towards the Classic Series off an unbeaten three-year-old campaign and a first-up four-year-old win in Class 2. He went on to capture the 2018 Hong Kong Classic Mile but has not won since and has finished out of the frame against top-class opposition in two runs this term.

“He hasn’t done very well but he’s been racing with Group 1 horses, so it’s a little bit difficult to get a guide on it. When he comes back to this class it’s a completely different world so hopefully he’ll perform a bit better in the lower grade,” Size said.

“I thought he was underdone going into his last race and he ran second to a very smart, up-and-coming horse in Golden Sixty, and he beat the rest by more than two lengths. If he’s improved further, he’s got to be a live chance in Saturday’s race off a light weight, given a softer run on the lead or outside the leader,” he said.

“He’s very fit, he’s fitter than last time, and I expect him to be right there in the finish. His work at Conghua has been top class according to the reports from my staff there,” Moore added.

The stable’s Good Standing (132lb) will also take his chance, back to a more comfortable distance, having finished sixth of eight over 1200m in the G2 Premier Bowl Handicap last time.

“We’re looking for a much better performance,” Moore said. “The 1400 (metres) should be perfect for him; we’ll keep him to 1400 and a mile rather than going any further.

“He was disappointing first-up, I thought he’d run a better race. He seems to have done everything right leading into this race and there are no issues to report.”