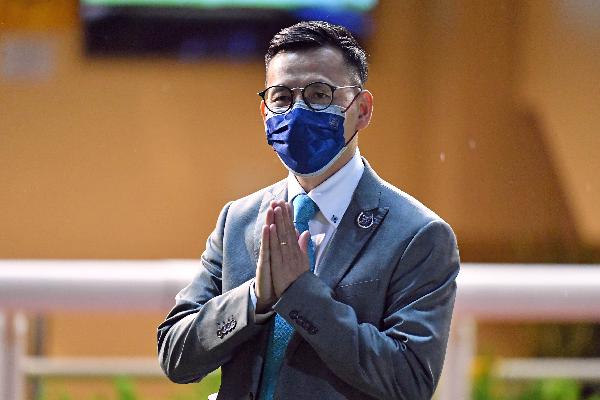 By Declan Schuster
After seeing Money Catcher end his exasperating winless run in Hong Kong, trainer Frankie Lor is hopeful Five Elements can emulate his stablemate when he lines up in the Class 3 Tai Ping Shan Handicap (1200m) at Happy Valley on Wednesday night (9 November) by ending his own luckless run of outs with a first win in Hong Kong.

Five Elements has been beaten four times by under length and boasts five top-three finishes since arriving in Hong Kong. He is out to join Money Catcher who left eight top-three finishes in his wake with victory in the G3 Sa Sa Ladies’ Purse Handicap (1800m) on Sunday afternoon (6 November) at Sha Tin.

“He’s (Five Elements) very consistent but he hasn’t won yet, so I hope he can win this race because this time he also has a good draw even with a big weight.

“I hope I can win the race for the owners,” Lor said.

Arriving from New Zealand, Five Elements was previously raced as Stormy and claimed the 2020 G2 Wakefield Challenge Stakes (1100m) before his export to Hong Kong.

Lor also saddles Savvy Kingman, Heroic Master, We The South and Run Run Cool at Happy Valley. The latter two will form a two-pronged assault for Lor in the Class 2 Po Yan Handicap (1000m) against eight other speedsters expected to light up the Valley.

“We The South drew barrier 10, it’s not easy to come across from there because he likes to lead. A few horses in the race are quite fast, so it wouldn’t be easy to lead but we’ll try, everyone knows when he leads he is better,” Lor said.

Run Run Cool will chase a first win at Happy Valley in the Class 2 feature after twice prevailing at Sha Tin.

“Two wins, both over the 1000 metres at Sha Tin. I think, he doesn't like too many horses around him and he likes the room, we’ll see,’ Lor said.

Heroic Master was set to be engaged last Wednesday (2 November), however, due to adverse weather conditions the race meeting was cancelled and his inclusion comes tomorrow night instead.

“Last week he drew six, this time he has barrier three which should be better. We can jump and follow the leader which is easier. The track would have been quite soft last week but this week it should be better, I think it will help him,” Lor said.

Keith Yeung has three wins from the last four fixtures and tomorrow night the 34-year-old is chasing further success when he gets the leg-up on Birdsville for David Hayes in the Class 4 Po Hing Handicap (1200m).

“It’s been made a lot more difficult with barrier 12, especially with a horse like him. We want the best position for him which is midfield and I really could have used a better gate, with that barrier there’s not many options, especially at Happy Valley.

“You don’t want to drag your horse back and sit behind the field, it makes it all too hard — you’re either going around them and losing a lot of ground or you can take the risk and get stuck on the inside,” Yeung said.

Rattan Kingdom closed well first-up for Jamie Richards and also lines up in the Po Hing Handicap. The Per Incanto gelding has drawn barrier 11 but does have Zac Purton atop.

“He’s probably come on from it a little bit (first-up run), he raced really well and was caught a little bit a deep and things didn’t go his way. Unfortunately last week (cancelled fixture) he drew a really good gate and this time he’s been put to the outside, so it’s going to be difficult for him from out there but hopefully on the ‘A’ Course with Purton on top will help,” Richards said.

Chung will partner Viva Popcorn in the first section of the Class 4 Bridges Handicap (1650m) before pairing with Copartner Ambition in the Class 3 Tai Ping Shan Handicap (1200m).