Hardly Swears is first to three in Valley feature 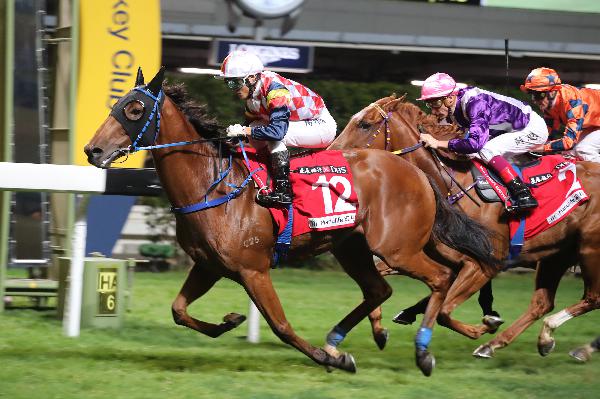 It wasn’t plain-sailing for the 3.2 shot though. Jockey Keith Yeung fell back to Plan B after 50 metres and then had to shift this way and that to find a clear path in the home straight.

“I wanted to put him one off, one back but I got checked at the start and got shut in and that meant I had trouble getting a clear run in the straight,” Yeung said.

“When I was going into the straight I was behind Beauty Spark and Mr Picasso and there was a run between them. After 50 metres the gap just closed, so I had to find him another lane and once I got into that lane he flew home.”

Finding that alley meant budging the one-paced Flying Sword out of the way at the 200m mark, a move that cost Yeung a six-day suspension. But despite the situation being touch-and-go at the point, the jockey was not perturbed.

“I know how good my horse is and I knew if I got the run he would make it; but he’s not an easy horse to ride, especially today, it was a tricky situation,” he said.

In his impressive dash to the line, the Jimmy Ting-trained gelding still gave his rider a hard time.

“He hangs in, he does it every time. If he’s on his right leg he’s ok but as soon as he switches to his left leg, that’s the time to hit the button, and he lies in every time. He goes like a snake,” Yeung explained.

“It’s immaturity and a bit of a bad habit he has in the morning — when I gallop him I have to hold the left rein really, really tightly to keep him straight and he brings that into the race.”

Hardly Swears scored by three quarters of a length from Joyful Union (132lb) who benefitted from a cool, creeping ride from the tail under Blake Shinn but was outdone by the talented winner who made it three wins from four career starts.

“He’s carrying no weight today which made it easier for him but I hope he can continue to progress. I think Class 3 is no problem, we’ll see how he copes with more weight, but he doesn’t feel like a sprinter to me,” Yeung said.

“He’s winning at six furlongs because he’s got the class, he’s better than these horses, but I’d love to see him at Sha Tin over 1400 metres, to see what he can do on the long straight where he’s got more room to sprint.”

The win gave Ting a double on the night, although he was not on course to enjoy it, being one of several local trainers in New Zealand for the Karaka Ready to Run Sale.

Earlier, Ting’s Amazing Star made an impressive return to action, winning the Class 4 Dandelion Handicap (1200m) in a sizzling time despite having been off the track since March. After overcoming lameness issues, the five-year-old suffered a fever in early October but showed no ill-effects with a front-running performance under champion jockey Zac Purton.

The gelding scorched from the gates and still had plenty in reserve down the home straight, rolling five and a half lengths clear. The winning time of 1m 08.92s smashed the 13-year-old Class 4 record at the track and was just 0.40s off former champion sprinter Ivictory’s overall course record. &nbsp;

“The track has been racing fast all night,” Purton said. “He’s matured as a horse — he had a long time off so he’s been able to develop and it was a good effort.”

Purton doubled-up when Reliable Team (128lb) overcame top-weight and a wide gate (11) to regain the winning thread by the nod of his head in the Class 3 Roselle Handicap (1650m).

The Frankie Lor-trained four-year-old won both his races last term but had been beaten at his last two. Tonight’s win, a battling, repelling short-head verdict over Cinquante Cinq (122lb), suggested the grey has further upward potential.

“That was a good tough effort,” Purton said. “He’s a young horse and he had to do the work from the wide gate. There was a mid-race move, which upset him a little bit, and then another one tried to take off down the back, so he never really got a chance to relax and enjoy it. He fought it out well.”

The night’s action ended with a thriller for the Class 3 Waratah Handicap (1200m). The Caspar Fownes-trained Aurora Pegasus and John Size-trained Shining Ace flashed past the post together. The judge ruled a dead-heat but a long delay ensued as the stewards held an inquiry into possible interference in the final couple of strides after the Shinn-ridden Shining Ace and his Alexis Badel-ridden rival came together.&nbsp;

In the end, the result stood. And that meant Aurora Pegasus competed a hat-trick to become the second horse this season to bag three wins.

Three for Yiu too

Trainer Ricky Yiu has his string in fine form and bossed the early part of the card with wins in three of the first four races. That treble took his tally for the season to 17 and lifted him to the top of the premiership.

Chad Schofield made all on Yiu’s 28/1 shot Kanbeki Molly in the opening Class 5 Aster Handicap (1650m). Vincent Ho repeated that trick in the next, the Class 4 Dandelion Handicap (1200m), setting the tempo on 4.6 third-favourite Loriz for a length and three-quarters win.

Alex Lai got his first win in two and half years just 11 days ago and the rider drove Indigenous Star home to give Yiu — in New Zealand for the Ready to Run Sale — his third win of the night in race four, section one of the Class 4 Hibiscus Handicap (1650m).

Ho hadn’t ridden a winner at the Valley this season before tonight but bagged a double when the Fownes-trained Naboo Star (126lb) sealed his first win at start nine in section two of the Class 4 Hibiscus Handicap (1650m), ahead of the Yiu-trained Forever Bright (119lb).

That brace sealed Ho’s place in the LONGINES IJC at the city track on 4 December.