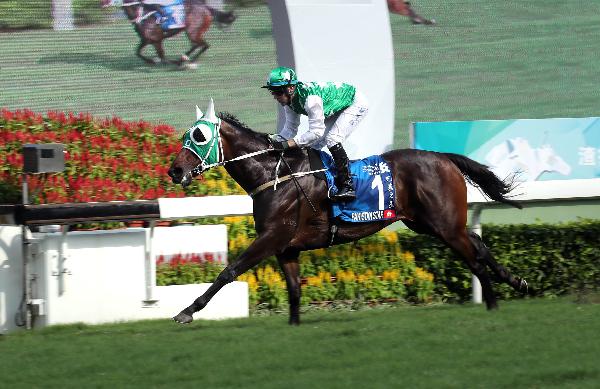 Pakistan Star sparkled through a dirt track barrier trial at Sha Tin this morning (Tuesday, 17 September) as he warmed up for what could be a re-defining return to action late next month.

Trainer Paul O’Sullivan let it be known towards the end of last term that he would like to drop the two-time G1 winner down to sprint distances - Pakistan Star’s two big wins have been achieved at 2000m and 2400m. The handler’s plans are, by his own admission, “up in the air” and “a little bit radical” but the sprinting experiment is still the number one option.

“I think we’ll kick him off on 20 October in the Group 2 (Premier Bowl Handicap) over 1200 metres and see how the trip suits him. He trials like a 1200-metre horse and whether he can take that into race day, we’ll find out,” O’Sullivan said.

And he dismissed as “pie in the sky” recent talk in the media about the gelding heading to the Middle East for the world’s newest mega-purse contest, the Saudi Cup, in February.

“They run on the sand and it’s a long way to go if you don't handle the track,” the New Zealander said. “We’ll head towards December and see where we go from there. We’re not sure which race he’ll go to in December, we need to see how handles the 1200 first - it could be anything from the Sprint to the Cup.”

O’Sullivan did not altogether rule out an overseas raid down the line and would relish the chance to test the Hong Kong International Sale graduate on a dirt surface under race conditions.

“I don't know the profile of the track in Dubai but if we could go to a track similar to the dirt track here, we’d be very happy to ship him around,” the trainer said.

Pakistan Star showed plenty of dash in today’s 1200m dirt track  trial. Blake Shinn, in the plate for the first time, felt a bit of the Shamardal gelding’s famous acceleration down the home straight. The six-year-old passed the post ahead of Waikuku and BMW Hong Kong Derby hero Furore.

“That was his usual trial,” O’Sullivan said. “He’s particularly effective in the mornings but Blake’s comments were positive, he said he showed good speed, he accelerated well and went through his gears, so we’re very happy with that.

“He’s carrying a little bit of weight and he’ll have time for another trial before he steps out so he should be fine by race day.”

O’Sullivan is keeping an open mind about future targets and would not shy away from facing Beauty Generation again at a mile.

“If the 1200 doesn't work out then we’ll have to step him up and see how we go,” he said. “We’ll just run him in the races that are most suitable for him; (Beauty Generation) has to get beat sometime.”

And he would like to have Shinn in the plate again when Pakistan star steps out next time.

“Blake has had a number of offers so I said that if after his next trial he could make some sort of commitment to it and I think that’s what he’ll do. There are plenty of other guys to ride him but I think Blake will suit him well, he travelled kindly for him,” O’Sullivan said.

BMW Hong Kong Derby (2000m) winner Furore caught the eye, running on for third under Grant van Niekerk. Frankie Lor’s charge has not been seen in action since finishing a disappointing 10th in the G1 FWD QEII Cup (2000m) in April.

“I just wanted to give him a little bit of a chance and then run on,” the South African jockey said. “They went quite slow early on so he was a bit keen but he finished off pretty good and I’m very happy with him. He travelled and he finished off so he’s quite fit and he’s a really nice horse to be on.”

The five-year-old is expected to return to action in the G3 Cleberation Cup Handicap (1400m) on 1 October, when he will likely meet Hong Kong high-weight Beauty Generation.

Another set for that contest is Derby runner-up and QEII 12th Waikuku. John Size’s charge was prominent in this morning’s trial and kept on soundly for Joao Moreira.

“Last time when I trialled him, I could feel that he was quite far back and I was expecting him to improve into this trial but not by as much as he did, so he surprised me how he trialled today. I’m really happy with him and I’m looking forward to riding him in the race,” Moreira said.

Size was satisfied too: “It looked fine. The horse had trained up nicely and that was his second trial this morning, it looked like a sound trial so I think everything’s on track for when he returns to racing. He’ll probably run on 1 October.”