Panfield’s back for another Sha Tin Trophy 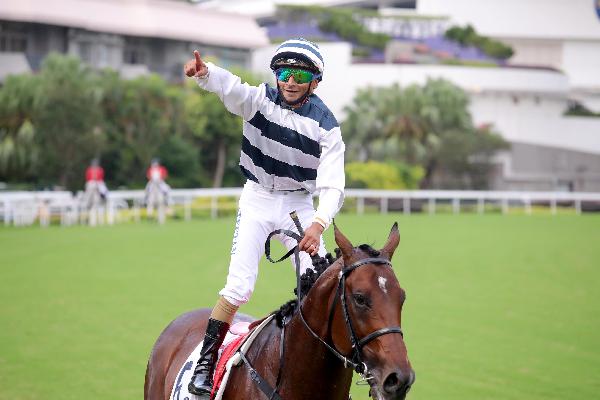 By Declan Schuster
Panfield returns this Sunday (16 October) at Sha Tin to defend his crown in the HK$5 million G2 Oriental Watch Sha Tin Trophy Handicap (1600m), however, he’ll do so with a new ally engaged to ride in the form of Silvestre de Sousa when he lines up for trainer Tony Millard.

“He’s a proven Group 1 winner over here and he should be in the mix in the big races this season, he’s obviously better over the trip and the longer he goes the better for him — that’s how he feels in the mornings — I’m excited,” De Sousa said.

Victorious in last year’s renewal first-up under Karis Teetan after claiming the 2021 G1 Standard Chartered Champions & Chater Cup (2400m), Panfield has since been without victory, but De Sousa maintains it’s all systems go ahead of this weekend as he prepares to partner Millard’s gritty stayer for the first time under race conditions.

Eager for more big-race success in Hong Kong, De Sousa has been in the plate for both of Panfield’s barrier trials, crossing the post first in each with the latter an eye-catching last-to-first effort over 1600m on turf at Sha Tin in 1m 37.18s on 27 September.

“It feels like a very competitive race, it looks stronger than last year but the horse is in good health and now we’ll just hope for a good run and that we can perform as well,” De Sousa said.

De Sousa currently has three wins and an exasperating 11 runner-up finishes from 44 rides this season, banking earnings of HK$8.58 million for connections.

“The Four-Year-Old Classic Series starts soon as well as the better races too, so I hope I can associate with a horse who can take me to the big ones,” De Sousa said.

Racing in the famed blue and white hooped silks of Mr Yue, Panfield is a three-time winner in Hong Kong who has collected HK$17.92 million in prize money. The Chilean-bred was crowned Hong Kong Champion Stayer in 2020/21.

Karis Teetan was initially slated to ride Panfield after partnering him in trackwork, however, the Mauritian was then expected to reunite with Romantic Warrior in Sunday’s test but his return to racing was delayed for trainer Danny Shum and subsequently Teetan has been sidelined with illness.

Millard previously won the Sha Tin Trophy in 2012 with the brilliant Ambitious Dragon, while victory this Sunday would be the handler’s third success in the race.

On Sunday (9 October) at Sha Tin, Maximus returned first-up for Millard to finish a game second to Man Star in the Class 3 Chinese Recreation Club Challenge Cup Handicap (1200m, dirt). It was the German-bred son of Ivawood’s first run for over 500 days, capping a frustrating stretch of setbacks for Millard and connections.