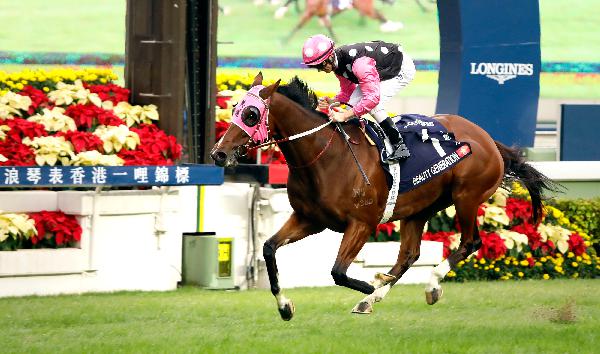 The bay heads into the weekend with a chance to match Good Ba Ba’s record of three wins in what nowadays is a HK$25 million race. But he does so with his aura of invincibility replaced by an encroaching mist of doubt following two losses in the lead-up.

Moore, though, was upbeat after this morning’s (Thursday, 5 December) workout; satisfied in his belief that his stable’s brightest star has not fallen.

The handler said after the Road To Rock gelding’s defeat three weeks ago behind Waikuku in the G2 Jockey Club Mile (1600m) that he would “tweak” a few things to ensure the world’s top-rated miler arrives at his “Grand Final” in peak shape.

“We’ve done a few other things in the stable, which I sat down and discussed with the stable staff – routine things that we could implement to make sure that there was nothing left to chance. We’ve done all we can,” he said.

“We’ve found nothing. He’s a very sound horse. No excuses now. He’s not giving away lots of weight so we’re looking forward to a big run.”

Beauty Generation stepped out at his heaviest racing weight (1161lb) when successful under top-weight in the G3 Celebration Cup Handicap (1400m) at the start of October. There is a school of thought that the champ’s two subsequent third-placings, the latest a dour third, could be linked to that epic, track record-setting, first-up effort.

“His weight has been a bit of an issue, definitely, we can go back to the first run and that probably took more of an edge off him than we anticipated it would have – but we’re not looking for excuses now. The bottom-line is he has to be ready for the big race on Sunday and he is,” Moore said.

The seven-time champion trainer has dipped into his deep knowledge bank to bring some freshness back to his charge, while at the same time ensuring he is produced in a state of absolute fitness.

“With the freshen-up he had, we sat down, myself and the staff, and had a chat about the work today and instead of repeating the work as in the past we decided that he needed a bit of a blow, even though his weight is right on song at the moment – we’ve got him now slightly under his winning weight when he won the Champions Mile last season,” Moore revealed.

A more usual pattern for Beauty Generation’s final work into a big race has been to gallop down the back straight, starting at the 1800m point. Today, Moore sent him on a full circuit, winding up down the home straight – although it must be noted that this approach is not unusual for the trainer and has been the method previously with Beauty Generation.&nbsp;

“We decided to let him go the 1400 metres and let him have a blow, which he did with our stable lead horse, so his rider Romain (Clavreul) was very pleased with the work.

Beauty Generation looked strong yet leaner in his frame this morning and while the bullish, playful self-assuredness he can exhibit at times was not apparent, the mechanics of his work appeared to be in well-oiled order.&nbsp;

The seven-year-old wore white cheek-pieces for his spin around the turf course in company with Harbour Master. “He can still gallop even with that belly,” Moore said of the stalwart old lead horse – a G3 winner three seasons back before retirement – as he towed the superstar into the straight.

Clavreul asked Beauty Generation to roll by and the response edged him easily to the fore as the duo passed the winning post – Harbour Master towards the outside rail, the big horse running a couple of widths inside.

“Mission accomplished, with respect to his work,” Moore said.

“Now we go back to level weights and he’s definitely the one to beat,” he added. “We’re just hoping for a gate a little bit wider than in the past, where he’s got a chance to come across. No doubt Ka Ying Star will go forward and take him on but we’ve done all that we need to do to get Beauty Generation back to where he was last season.

Moore has one eye on the Japanese raider Indy Champ, a two-time G1 winner this year, having defeating Almond Eye in the Yasuda Kinen (1600m) and zooming past Danon Premium in the Mile Championship last month.

“Indy Champ has won the two big Group 1s in Japan this year, so our work is going to be cut out if he brings his ‘A Game’ to Hong Kong. We do have home town advantage but we have to respect the Japanese because they’re a force to be reckoned with anywhere in the world, not only in Hong Kong,” Moore opined.

But he is also wary of the John Size-trained Waikuku, Beauty Generation’s conqueror in the Jockey Club Mile and a four-year-old seemingly still on the up.

“Waikuku has to have improved too – I’m not taking him cheaply either! And there could always be a dark horse there,” he said.

Later, at the barrier draw, Moore added: “He’s drawn gate five and that gives him the opportunity to gather speed and let Ka Ying Star go to the front. In all probability he’ll be racing outside the leader.”

Time will tell as to whether or not the “tweaks” have worked, but if they have, Sunday’s Mile could be one awesome show.