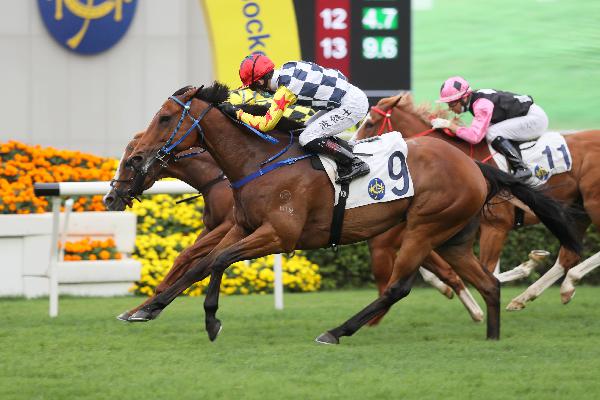 By Declan Schuster
Amazing Star caused one of the biggest feature-race shocks in Hong Kong racing history when he landed the G2 Sprint Cup (1200m) earlier this month, and this Sunday (25 April) at Sha Tin the six-year-old bay is out to prove that his effort was no fluke when he contests the HK$18 million G1 Chairman’s Sprint Prize (1200m).

“Winning the Sprint Cup was just amazing, I never thought he could win – he just got lucky but since that run, he has improved, he is even better than last start,” trainer Jimmy Ting said.

Sent off an unconsidered 178/1 chance, the seven-time winning gelding belied the odds when he put paid to 12 rivals, charging out of the pack to deny Stronger by a short-head.

But not only does he face a sharp and relatively evenly matched contingent from Hong Kong this weekend, the 113-rater will be tested once again by the all-conquering Danon Smash from Japan, who returns to Hong Kong off the back of a second consecutive G1 score having secured the 2021 Takamatusnomiya Kinen (1200m) in his home country at the end of March.

“The sprint ranks are open in Hong Kong but the main danger is the Japanese horse, Danon Smash, he looks very strong - I just hope that Amazing Star can run well,” Ting said.

“His form is better, better than before his last run and I hope that helps him a lot,” Ting said regarding the Darci Brahma galloper who bagged his second win at Sha Tin in the Sprint Cup after previously collecting all of his last five career wins at Happy Valley.

The New Zealand-bred will again pair with jockey Vagner Borges and the duo will depart from gate four.

“It’s a nice draw for him, there isn’t too much early speed to the inside of him, so hopefully he can get a good position – I’m very happy,” Ting said.

“He galloped on Tuesday, he was smooth, he did it well – he’s healthy and I hope he runs well this weekend,” Ting said.

“When he has a wide draw, he can find himself being too keen in the run, he needs to roll forward and find a good position on the speed, then he can sprint home,” he added.

The HK$9.062 million earner has contested Pattern level five times, his best result before his last-start win, the close-up fourth he snared four starts ago in the G3 Bauhinia Sprint Trophy Handicap (1000m) at the beginning of the year. &nbsp;

“He’s an easy horse to train, he just has a few health problems at times,” Ting said of the PPG (Privately Purchased Griffin) who had numerous leg issues through 2018 and 2019.

Searching for a maiden G1 triumph as a trainer, Ting will be represented solely by the speedster across the trio of top-level contests on FWD Champions Day.

“Every winner is important, not only Group-race winners, if we can run in Group 1s then it means I have a good horse,” Ting laughed.

Beauty Applause is the sole representative for 11-time champion trainer John Size, who is looking to secure his fourth win in the race after Grand Delight (2003), Ivictory (2018) and Beat The Clock (2019).

“Gate two gives him his chance, if he’s good enough to earn some prize money then he certainly gets his chance from there,” Size said.

The gifted son of Stratum finished third to Amazing Star in the Sprint Cup earlier this month and readies for his 10th start this season in Sunday’s Chairman’s Sprint Prize.

“He seems fine, he’s had a lot of racing this season but he seems to have maintained his form - he still looks good, his work has been ok and nothing has changed at home, so I just hope he has another run in him this season,” Size said.