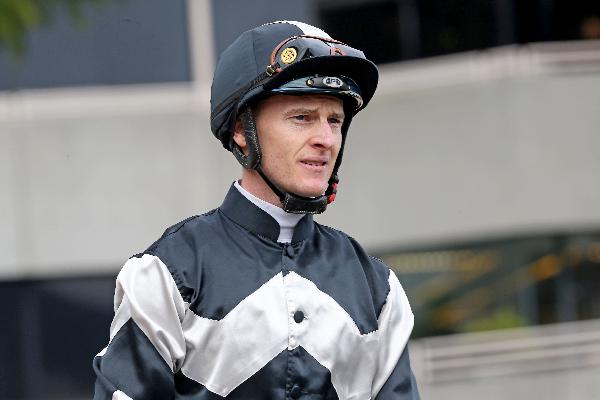 The lightly-raced talent blitzed rivals two starts ago from the front under the Australian ace — who hops back in the plate aboard the chestnut tomorrow night for his first try at the city circuit.

“He’s a lightly-framed horse and quite often they can get around the tight track quite well, but he was quite adaptable overseas before he came here and he’s been able to adapt to wherever he’s gone here as well — I don’t see the track being a problem for him,” Purton said.

A one-time winner from four starts in Hong Kong, the Sebring gelding — formerly known as Talladega in Australia — has come to hand this term as a five-year-old after two unplaced efforts as a four-year-old last season, including in the Hong Kong Classic Mile.

Trained by Tony Cruz — Beauty Joy (125lb) has trialled once before at Happy Valley — leading from the get-go under Purton to cross the line first over 1200m by just over a length in a time of 1m 12.06s.

“Both of his runs this season have been good, he’s been to the Valley for a trial recently, so he’s somewhat familiar with the course and he’s drawn a nice gate — hopefully he can find himself in the right spot and give us a nice run,” Purton said.

A runaway winner from the jump two runs back — Purton doesn’t believe the 88-rater is a one-trick pony.

“I don’t think he has to (lead), I rode him in a trial and he sat behind them — so he can adapt,” Purton said.

Engaged to ride Packing Victory in the first jewel of Hong Kong’s age-restricted series, Purton has been pleased with his mount’s progress between runs.

“I worked him at the end of last week and he’s working well, he’s come through his last run really good, he’s striding out well — he just continues to do what he needs to do, he’s getting stronger each time and hopefully he continues to progress the right way,” Purton said.

The Reliable Man gelding scored a commanding two-length win at his first try in Class 2 last start — enhancing his rating to an imposing 89.

“I think it’s a strong year (for the Four-Year-Old Classic Series), I think there is a number of chances from a number of different stables — it’s competitive and the melting pot is all starting to come together at the right time, so we’ll know more after the Classic Mile and heading towards the Derby,” Purton said.

Purton is expected to ride Waikuku in the Stewards’ Cup and Hot King Prawn in the Centenary Sprint Cup this weekend.

“I’m delighted to get the opportunity on a horse like that, he looks like he’s of course improving all the time and his win last time looked good.

“Listening to Joao’s (Moreira) interview he said he was pretty confident, so he knew what he was sitting on top of going into the race and of course he’s progressing nicely,” Teetan said.

Joao Moreira has partnered the galloper in all of his wins but instead is committed to partner Master Delight for John Size in the Hong Kong Classic Mile.

Projected as one of the chief protagonists for the upcoming Four-Year-Old Classic Series, Romantic Warrior has risen 33 rating points to a career-high mark of 85 — boasting two wins in Class 4 and 3 from four starts overall for trainer Danny Shum.