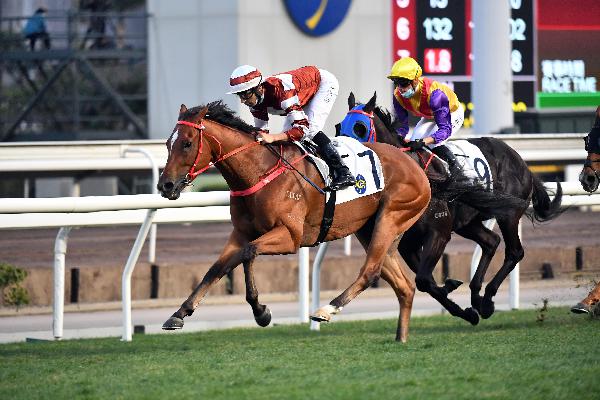 Leo Schlink
Vagner Borges hopes victory on Sight Success in the Class 2 High West Handicap (1200m) at Happy Valley on Wednesday (10 November) can lay the foundations for even higher achievement with the John Size stable as the Brazilian looks forward to riding star sprinter Hot King Prawn later this month.

Borges has been booked to ride G1-winning Hot King Prawn in the G2 BOCHK Private Banking Jockey Club Sprint (1200m) at Sha Tin on 21 November — a contest crucial to the grey’s preparation for the G1 LONGINES Hong Kong Sprint (1200m) on 12 December.

Three of Borges’ five winners in the 2021/22 season have come for Size and the 28-year-old is optimistic his growing affinity with Sight Success — he is unbeaten in two attempts aboard the Magnus gelding — will enhance ambitions to secure more rides from 11-time champion trainer Size’s stable.

“It’s great to get support from John Size and Hot King Prawn is a really good horse. Things are going the right way for me at the moment,” Borges said after the Sight Success downed Ka Ying Master and Winning Method to notch his fifth win from 11 starts in Hong Kong.

“I’m going to be on a very good horse next week and hopefully we can do something good.”

Jumping from barrier two, Borges stalked the speed on Sight Success (124lb) before driving strongly through the line to log successive wins in Class 2.

“He (Sight Success) ran really well last time and he had improved a lot coming into this run,” Borges said. “I knew there was a good chance of him winning again and I’m glad he did.

Size celebrated a double with Scores Of Fun, who steamed late to snare the second section of the Class 3 Lung Fu Shan Handicap (1200m) under Joao Moreira. Five of Size’s nine winners for the term have come in the past eight days.

Man has 12 victories for the season, with the stable notching three wins so far this month.

Ricky Yiu praised Zac Purton’s measured ride on Off The Reel, winner of the Class 5 Wan Chai Gap Handicap (1650m), as the Dundeel gelding broke through at his 11th attempt.

“The horse is very laidback but Zac rode him well,” Yiu said. “He got him into the right position and got him going early coming into the straight. The horse wobbled a bit in the straight — he’s a bit of a thinker — but he’ll go up in class now and I’ll keep him at a mile.”

Champion trainer in 2019/20, Yiu had been frustrated by a stream of near-misses with 13 seconds leading into the 18th meeting of the term.

He now hopes the balance will continue to tilt more positively following the Happy Valley double, which left him with a winning tally of five for the season.

“After 13 seconds it's certainly nice. The draws have started to get a little bit better, so the majority of my horses are performing,” he said. “He (Joyful Win) won two (races) last season as a three-year-old and he's not fully matured yet. He's four now and Class 4 is kind of easy for him, he's on his way up - he's improving all the time at trackwork and in his races.”

Frankie Lor extended his lead at the top of the trainers’ championship when Joao Moreira drove Savvy Kingman to a tenacious triumph in the Class 3 Mount Davis Handicap (1800m) to provide the stable with its 17th success of the season.

Derek Leung and Benno Yung successfully combined with Prance Dragon in the Class 4 Mount Kellett Handicap (1200m) before David Hayes climbed into second place in the trainers’ standings when Red Majesty prevailed for Zac Purton in the first section of the Class 4 Victoria Gap Handicap (1650m).

The win was Hayes’ 15th of the campaign, while Purton’s double gave the Australian his 31st win of the season to maintain an eight-win lead over Moreira, who also had a brace.