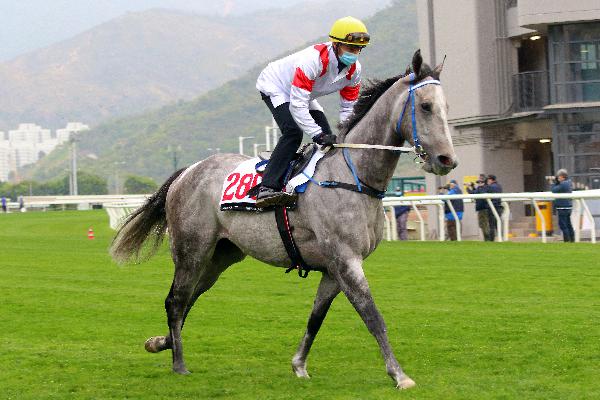 By Leo Schlink
Classique Legend, acclaimed as the world’s equal top sprinter in 2020, is likely to return to Australia after he bled from his left nostril following trackwork at Sha Tin this morning (Wednesday, 31 March).

The winner of The Everest (1200m) at Randwick Racecourse last October, the grey finished 11th in the G1 LONGINES Hong Kong Sprint (1200m) behind Japan’s Danon Smash on 13 December for Caspar Fownes.

Fownes was bullish about the gelding’s recovery from niggling injuries following his debut run last December but was shattered to find the mercurial sprinter had bled after working over 1200m today with The Hulk, sweeping home the final 400m in 22.4s.

“Very unfortunate because his gallop was unbelievable, he worked like a bullet, coming home beautifully,” Fownes said.

“He had a couple of coughs after his work and he sort of had a trickle of blood out of his left nostril and we called it. We informed the Club that he had some blood and then the vet scoped him.

“I said to Bon he should go back to Australia because he’s too good a horse,” Fownes said.

“He’s struggled in the environment and Bon’s thinking the same way. It’s the right thing to do with the horse because from, day one, it’s been an uphill battle.

“We’ve had him right where we wanted him and Zac Purton was very, very happy after the workout this morning and then this happened.

“We’ll probably send him back at the end of May. These things happen in our game, it’s very unfortunate.”

Fownes had hoped Classique Legend would resume in the G2 Sprint Cup (1200m) at Sha Tin on Monday (5 April).