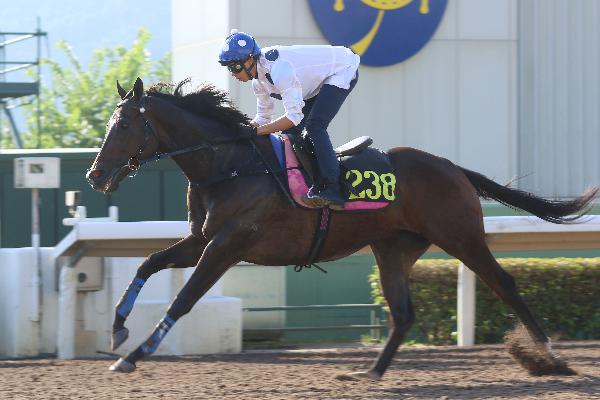 Much to the delight of jockey Vincent Ho, the brilliant six-year-old moved freely over 1200m, clocking 1m 10.02s - three and a quarter lengths ahead of his nearest rival as he enters the final five weeks of his preparation towards the G2 BOCHK Private Wealth Jockey Club Mile (1600m) on Sunday, 21 November.

“He felt good, I’m happy with him. He relaxed well early, travelled so nicely and once he hit the straight he stretched out nicely, so I’m really happy with him,” Ho said.

A winner of his last 14 races - including four at G1 level - Golden Sixty is closing in on Silent Witness’ record of 17 consecutive wins, but his first goal is December’s LONGINES Hong Kong International Races and the successful defence of his G1 LONGINES Hong Kong Mile crown.

“He’s still, for sure, not even 80 per cent fit, I would say around 70 per cent, but once he jumped out the gates he knew his job, but he’s never really showed too much at the trials,” Ho said.

The Francis Lui-trained galloper has had two trials ahead of his return, crossing the line first in both - once on the turf and once on the dirt.

“Generally, I’m happy with how he’s performing at the moment and after this trial we’ll still probably give him one more and make sure he’s ready for December,” the rider said.

Ho is banking on the 131-rater’s freshness when he makes his return next month, though also mindful of the factor that his opposition’s race-fitness will play. &nbsp;

“Most of the horses in November will have already had at least one or two runs so they will have the race fitness, so we just have to make sure Golden Sixty is ready for that,” he said.

Also preparing for their respective seasonal returns was John Size’s duo, Hot King Prawn and Excellent Proposal, who stretched out comfortably in the morning’s opening trial.&nbsp;

Throughout, the pair extended nicely down the straight as Ennea Fortune led the field home in a time of 57.46s over 1000m on the turf.

Eyeing a seasonal return on 13 November, Excellent Proposal will contest the Class 1 Panasonic Cup Handicap (1400m) for his first-up assignment next month.

“The horse is fine, he’s in good shape and he seems to be healthy and well.

“He’s had a good break and he’s had a couple of trials down the straight - everything has seemed normal,” Size said.

Size remains pleased with Hot King Prawn’s progress as the consistent grey nears his respective return to racing in next month’s G2 BOCHK Private Banking Jockey Club Sprint (1200m), a race the galloper has previously won twice in 2018 and 2020.

“He too seems fine, he’s normal - he can trial however you want him to trial, he normally just does whatever the jockey asks him to do but he seems good, there’s nothing that you could be concerned about with him,” Size said.

The seven-year-old has 12 wins from 24 starts in Hong Kong, including last term’s G1 Centenary Sprint Cup (1200m) which he won by one and three quarter lengths.&nbsp;