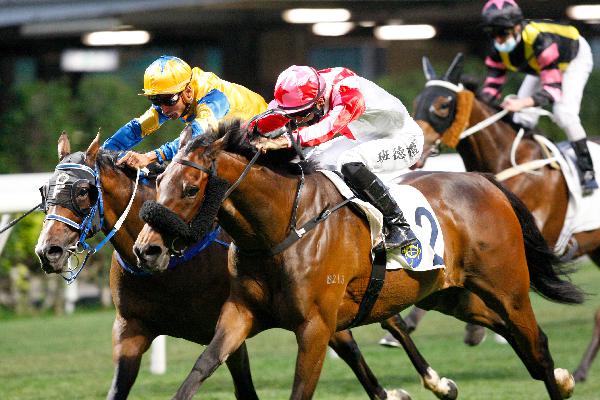 Making light of the quirky track’s undulations and cambers, Bentley revelled in a dream baptism of fire by triumphing with his first ride at the course as Douglas Whyte’s Vincy smashed the track record in 2m 14.14s – bettering the 2m 14.88s mark set by Helene Charisma in 2019.

Having just his seventh ride in Hong Kong after six outings at Sha Tin on Saturday, the young Englishman was jubilant after producing a poised, calculating ride aboard a galloper more renowned for near misses than winning.

“A mixture of, I guess, a bit of relief – not that it’s has been a long time coming or anything, this is only my first time riding here. It’s great - first ride around Happy Valley to get a win on the board,” Bentley, 28, said.

“I came early today and walked the track on my own. Just got a feel for the place, took it all in. Obviously, it walks differently to how it rides but I was granted with a nice stall (two) and I was able to follow Joao (Moreira) around – there’s no better person to follow.”

Embarking on a three-month stint until the end of the season in July, Bentley used information gleaned from his hotel window during quarantine to telling effect.

“I’ve been watching racing here for the last couple of weeks while I’ve been in my hotel looking over the track, so to come here and win with my first ride is fantastic,” he said.

“My room was halfway up and it looked over most of the track, there was a bit of the back straight and the top end I couldn’t see, but the two meetings that were here, I watched from my room.

“I was switching between watching the TV and looking out my window.”

Bentley hailed Whyte’s backing: “Douglas has been fantastic, he’s given me good support. From someone like him, it’s really quite something and I’m really appreciative of those opportunities.

“Me coming here to Hong Kong, obviously I know nothing about the place, and he offered some valuable insights, which were really informative and really helpful.”

Conceding it had taken an eternity for “the penny to drop” for Vincy – who took 28 starts to break through and has now won two of his past four – Whyte was delighted to provide Bentley with his first winner.

“I knew what it was like being thrown in the deep end coming to Hong Kong with nothing behind me, no support and all expectations in front of me,” the 13-time champion jockey said. “I’m very glad I could afford him the opportunity of getting his first win for me.

“He rode the track amazingly for someone that’s never ridden at Happy Valley. He’s a talented rider, he’s got a good, level head and he’s got a nice style so it’s going to stand him in good stead going forward.

“He’s got a great set of hands on him and if you can do that you are going to win a lot of races. He got off the rail at the right time, had he have sat on the rail and waited we would have got beaten, but he came off at the right time and he had his momentum going, which is what Happy Valley is all about.”

So also registered a brace through Split Of A Second, who was ridden by Antoine Hamelin, in the first section of the Class 5 Duddell Handicap (1200m) - the gelding’s first win since 5 December 2018.

Blake Shinn and David Hayes teamed up with Fearless Fire in the first section of the Class 4 Edinburgh Handicap (1650m) as the seven-year-old posted his second win in succession and fifth overall in Hong Kong.

Shinn improved his seasonal tally to 18 after booting home a winner for the third consecutive meeting, while Hayes now has 20 winners for the term, having produced a winner at each of the past six meetings.

Man savoured a double with Cantstopthefeeling, who won the Class 4 Pedder Handicap (1000m) for Vagner Borges, while Me Tsui (22 winners) and Matthew Poon continued solid seasons with the success of Telecom Rocket in the Class 4 Garden Handicap (1200m).

Poon then notched his 27th success of the season by guiding Frankie Lor’s The Runner to success in the first section of the Class 3 Queen’s Road Central Handicap (1200m). Lor boosted his 2020/21 haul to 50 to be equal third with Danny Shum and Francis Lui behind John Size (57) and Caspar Fownes (54).

Lui brought up a half century of winners for the season when High Rise Soldier charged late for Vincent Ho to breakthrough for his first Hong Kong victory at his 20th attempt by landing the second section of the Class 3 Queen’s Road Central Handicap (1200m).