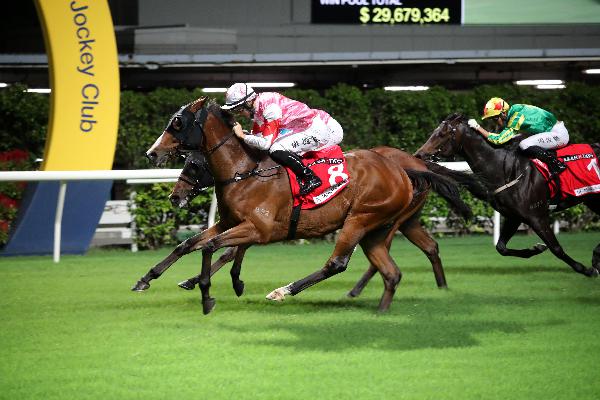 By Leo Schlink
Demonstrating the benefits of an exhaustive three-month stint at the end of last season, Harry Bentley put hard-won lessons into immediate effect with victory on Turin Redstar in the Class 3 Community Chest Cup Handicap (1650m) at Happy Valley on Wednesday (8 September).

“It’s a fantastic way to start the season, I’m very pleased to have grabbed a winner on just the second meeting,” said Bentley, who rode five winners in Hong Kong last season. “It was very important for me to keep up the momentum that I finished with at the end of last season, just to bang in one early is great – it fills me with confidence.

“The fact I rode the last three months of last season – I knew it wasn’t going to be easy to come into the jockey ranks – gave me some valuable experience while gaining contacts and understanding how the whole system works.

“It’s enabled me to start this season with a bit of traction.

“I was drawn well in (barrier) two, but there was a good old battle at the start to get that handy box position. I decided to take my mount back and get a breather in a perfect position in the second pair, one off the rail, and he relaxed well. He’s not got the best turn of foot, but I was confident at the top of the straight.”

Described by trainer Douglas Whyte as “

Decisive Twelve also holds joint share of the lead with 15 points after victory for Chris So and Alexis Badel in the Class 3 Shek O Handicap (1200m).

The series, which involves Happy Valley races of Class 3 or above until 23 February, 2022,

The challenge operates under a points system of 15 points for a win, six for second and four and three points, respectively, for third and fourth.

In a sign of things to come, Joao Moreira, Zac Purton and Karis Teetan – last season’s top-three in the championship – have quickly surged to the fore.

Danny Shum has been one of Purton’s strongest supporters for many years – the pair shared 29 winners last season – and the duo already has three victories in tandem this term.

Piano Solo delivered the pair’s victory of the night in the Class 4 Deep Water Bay Handicap (1650m) before Fortune Carrier prevailed in the first section of the Chung Hom Kok Handicap (1200m).

“I’ve always had a very good relationship with Zac because we trust each other. It’s good teamwork,” Shum said.

Me Tsui-trained Shanghai Power kicked off the Happy Valley season in superb fashion with a sustained display of speed under Moreira to win the Class 5 Big Wave Bay Handicap (1000m) in a new class record of 56.52s.

Teetan continued searing form with victory on Wood On Fire in the second section of the Class 4 Chung Hom Kok Handicap (1200m), prompting trainer Peter Ho to describe the success as “precious.”