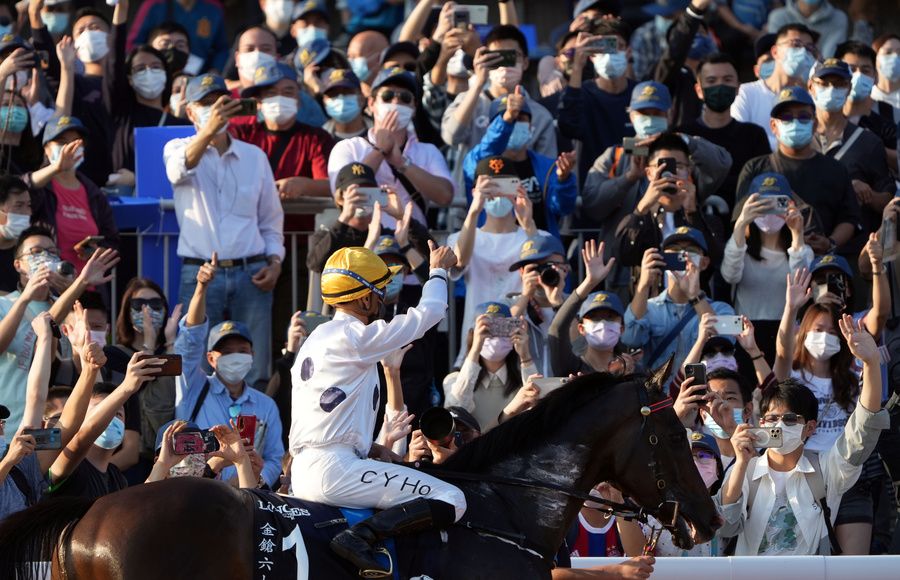 By Declan Schuster
Fresh off his record-setting success aboard Golden Sixty in Sunday’s (12 December) G1 LONGINES Hong Kong Mile (1600m), Vincent Ho is quickly turning his attention to Wednesday’s (15 December) eight-race card at Happy Valley as he looks to maintain the momentum with seven rides at the city circuit.

With 10 wins under his belt since the start of November, Ho is engaged to partner Party Warrior in the finale - Class 3 Venus Handicap (1200m) - buoyant of further development from the lightly-raced talent when he gets the leg-up for the fourth time on the 63-rater tomorrow night.

“He has potential - since I first rode him he was always still very green, especially in his first few starts and sometimes he was a little bit unlucky but I don’t think there are any concerns regarding his ability; he’s raced a few more times now, so that’s helping him too,” Ho explained.

A four-year-old son of Contributer, Party Warrior boasts three second placings and one win from six starts in Hong Kong — a triumph he landed last-start over the course and distance under the hands of Zac Purton.

“He’s still immature, so he has room to improve for sure, which is the main thing,” Ho said. “It’s a tough race and we’ll see how it pans out but he should run well.”

Reflecting on Sunday’s historic win, Ho remains in awe of Golden Sixty and his incredible exploits on the track.

“I’m just really grateful that I can be on Golden Sixty, he’s such a great horse,” Ho said. “It was just a bit tricky from gate two, that was my only concern as we had different plans obviously but I had to accept where I was and I had to believe in my horse.”

The six-year-old son of Medaglia d’Oro’s win at the 2021 LONGINES Hong Kong International Races encompassed a new all-time wins record in Hong Kong, with the local champion savouring the 19th success of his career, one more than both Silent Witness and Beauty Generation achieved, dating back to when the professional era of Hong Kong racing commenced in 1971.

“He felt great after - he was still a bit grumpy which is good because if he was tired he wouldn’t care, he was still grumpy when people showed up to his stall and that tells me that he is totally fine, it means he’s not so tired, which is great, so we’ll focus on his recovery and on to the next start,” Ho said.

Now with 16 successive wins under his belt, Golden Sixty is just one away from equalling the great Silent Witness’ record of 17 straight wins in Hong Kong.

“I think Francis (Lui) is planning for him to race in the Stewards’ Cup (G1, 1600m) in January and after that we’ll figure out which race we’ll go for, we‘ll select the races because we don’t want to tire him out if we are really going to go international with him, it’s one race at a time and we need to be mindful not to use him too much,” Ho said.

“One of our goals is to race overseas, but with the restrictions due to COVID-19 it’s still very uncertain, Golden Sixty hasn’t travelled since he came to Hong Kong - he hasn’t been to either Conghua or Happy Valley even but he’s a really fast learner, so we’ll need to refresh him with travelling and he should be fine,” Ho said.

An overseas target for Golden Sixty is yet to be decided but Ho identified the G1 Yasuda Kinen (1600m) at Tokyo Racecourse in June as an option.

“We’ll still discuss it but maybe Tokyo, let’s see what the owner (Stanley Chan Ka-Leung) and Francis want to do with him, we have a few options,” Ho said.

Like Vincent, Alexis Badel has seven rides at the midweek fixture including Exceptional Nice in the Class 3 Mars Handicap (1650m), looking to guide the consistent son of Tavistock to a first win following five consecutive runner-up efforts.

“I like this horse, he’s been very consistent with the way he runs and he’s always been very close and he always tries very hard,” Badel said. “Unfortunately he’s been beaten on the line a few times but he tries hard and he’ll be ready to run a good race again.”

Trained by Chris So, the 68-rater missed by a neck first-up to Fa Fa who, in contrast, has enjoyed a meteoric rise through the grades with a quintet of successive wins.

“I feel pretty good actually, if the doctors didn’t tell me all of the little injuries I have I’d be ready to jump back on a horse now, but I just need a couple of weeks off, maybe, the wrist is probably the most sore at this stage but the four fractured ribs are ok.

“I’m surprised I have the fractures (in the ribs) because they feel fine, the nose is not a problem, it was already bent but the wrist is a little sore, so I’ll see the specialist today and we’ll try and work out how long I’ll be out for and what to do with that,” Purton explained.

Battered and bruised, Purton already appears eager to hop back in the plate — indicating a two to four week period on the sideline: “I’d say four weeks at the most, two weeks probably at the best.”

Before Sunday’s mishap, Purton was performing at the peak of his powers with three wins from the first three races on the programme.

“I’ve already booked in to start using the Hyperbaric (Oxygen) Chamber and do a few other things, so I’ll try and speed up the process as quickly as I can and if I am back in two weeks, then I’m back in two weeks, but if it takes three then so be it or four, hopefully at the worst,” Purton said.

Purton’s wins on the weekend came aboard Fast Most Furious and Good Runner for David Hall, before he capped his running treble atop Tempest Express for John Size.

“Thankfully we’re all ok, Lyle (Hewitson) was probably the one I had the most concern for, and my thoughts were with him but thankfully he’s good and I was able to see him in hospital before I walked out and left. I’m going back today to see the specialist, so I’ll go and see how he’s going but he’s in good spirits as well, it’s nice that we’ve all walked away with relatively small and minor injuries,” the four-time champion jockey of Hong Kong said.

Wednesday’s (15 December) eight-race programme at Happy Valley kicks off with the second section of the Class 4 Jupiter Handicap (1200m).