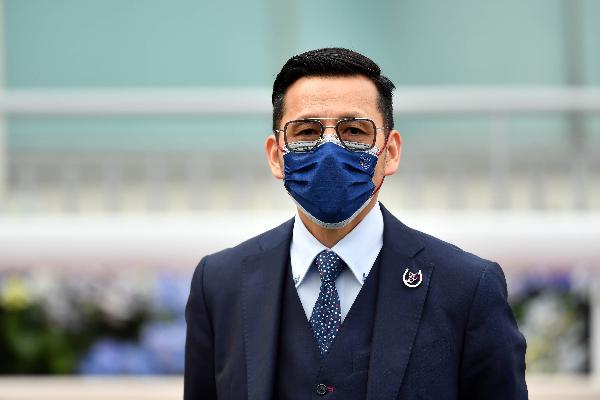 By Declan Schuster
Frankie Lor is the hottest trainer in Hong Kong right now with eight wins from the past four race meetings and his prospects of landing a maiden title hit all new highs on Sunday (3 April) as he drew level with John Size at the top of the championship table (61-61) after erasing his former mentor’s eight-win lead ahead of the season’s 60th fixture at Happy Valley (Wednesday, 6 April).

Savouring his 300th win in Hong Kong at Sha Tin on the weekend too, Lor reached the triple century of career-wins in just his fifth season of training after hauling 65, 65, 44 and 65 wins across his first four seasons at the helm, crowned with big-race victories thanks to Mr Stunning, Glorious Forever and Furore.

“The stable and the whole team are doing really well, also in Conghua, even though the border is closed, the team is working really hard for me — the riding boys, mafoos (grooms) and everyone, so I am really happy,” Lor said.

Growing up in Happy Valley — Hong Kong racing’s spiritual home, Lor was destined to enjoy a lifelong career in the sport. He accrued 27 wins as a rider between 1981 and 1995 before turning his attention to training, most notably working as an assistant under the tutelage of two of Hong Kong’s all-time greats, John Moore and John Size.

Since being granted a full licence to train ahead of the 2017/18 racing season, the 56-year-old’s career has been one of remarkable consistency with immediate success including a winner at his first runner before scooping a double at the 2018 LONGINES Hong Kong International Races with Mr Stunning and Glorious Forever in only his second season of training.

And while Master Eight narrowly missed the mark in the G2 Sprint Cup (1200m) behind Wellington, the handler may have unearthed another super short-course talent on Sunday afternoon with Sakewin successfully overcoming gate 14 to prevail with ease on debut.

“When he arrived in Hong Kong, he had a few trials and he looked really good, so that’s why I was quite confident that he could run well, but as always, you have to see it and that’s a good first start,” Lor said.

“I’ve decided send him to Happy Valley — he has had one trial there previously, so I think he is ok to race at the track,” Lor said. “I want to see; this race should be suitable for him.”

Money Catcher has raced four times in Hong Kong, displaying steady progress in each outing after arriving from New Zealand where he finished runner-up in the 2021 G2 Auckland Guineas (1600m) and 2021 G2 Avondale Guineas (2100m).

Looking Great also features in the same race for the handler, bidding for a fourth Hong Kong win with Jerry Chau in the plate, while Derek Leung gets the leg-up on Money Catcher.

“Normally, 1800 to 2000 metres should be better and also, there’s not many options around for him (Looking Great), so I decided to send them both to the same race,” Lor said.

Lor saddles a team of seven at the midweek fixture under lights.

“We’ll see, the straight is a little bit shorter at Happy Valley than Sha Tin, honestly, I think he can go a bit further than 2000 metres, so let’s see if he runs well, we can try to go for the Group 3 next month,” So said.

The Dundeel gelding — sporting the familiar silks of Mr and Mrs Wong — led from the get-go to land a first win for connections after enduring an exasperating string of setbacks, including a heart irregularity.

“I think he can go further, that’s why we’ll first see how he performs and then I’ll discuss it with the owner. His form in Australia seems as though he should be able to handle further, he’s quite one-paced too, so that’s why I think he should suit going over further,” So said.

“He has a bit of a history with setbacks, but I’ve spent a long time with the horse since I got him, building up his confidence and his form. His performance was pretty good last start and I think he is still in good form,” So said.

“I discussed it with the owner, we want to try him at Happy Valley — his form is good,” So said. “I really hope he stays healthy, this is very important with these kind of horses.”

By Leo Schlink
Soulmate capped a season crammed with improvement and success with dramatic victory in the Class 2 Bellflower Handicap (1800m) at Happy Valley on Wednesday night (8 June) to justify Ricky Yiu’s faith in the talented former Kiwi galloper.

By Declan Schuster
Spurred on by Valiant Elegance’s indomitable run of form, Lyle Hewitson is remaining buoyant the chestnut has got what it takes to join a select band of gallopers with victory in the first section of the HK$1.57 million Class 3 Calla Lily Handicap (1200m) at Happy Valley on Wednesday evening (8 June).

By Leo Schlink
In the throes of another successful season, Tony Cruz is aiming to land a sentimental victory in the Class 3 Apprentice Jockeys’ School 50th Anniversary Cup Handicap (1200m) with Super Fortune at Sha Tin on Sunday (5 June).

By Declan Schuster
Karis Teetan heads into Wednesday’s (1 June) nine-race card at Happy Valley primed for the mount aboard Escape Route in the second section of the HK$1.57 million Class 3 Caine Handicap (1650m).