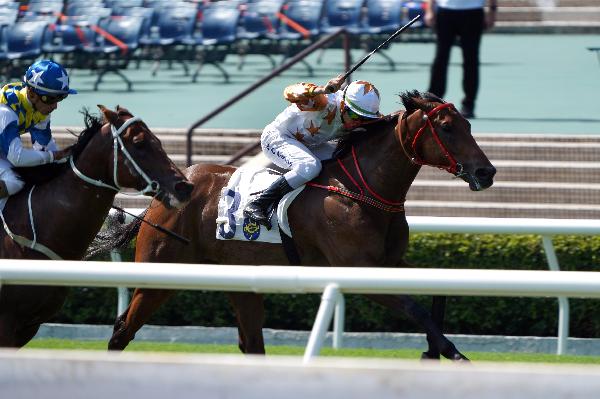 The gelding, having just his third start for trainer Dennis Yip, was sent out at win odds of 44/1 but surged late to overhaul the Tony Cruz-favourite Computer Patch by a short head with Rattan, the second least fancied of the seven runners, two and a quarter lengths back in third for Richard Gibson who formerly prepared the winner.

Wishful Thinker was winless last season, after six wins in his first two terms post-import from Australia, but he ran with some credit; finishing a neck third, behind Seasons Bloom, in this race and being beaten just one and a half lengths when sixth to Beat The Clock in the LONGINES Hong Kong International Sprint.

And now, despite his age and the weight advantage he enjoyed today, he may not be an unrealistic contender - at the very least among the locally trained horses - for this year’s HK$22 million Hong Kong Sprint showpiece. Aerovelocity, at eight in 2016, is the only HKIR Sprint winner older than six years.

Winning jockey Derek Leung said Yip’s decision to take the blinkers off the seven-year-old was one of the keys to his success along with the genuine pace at which the race was run.

“We took the blinkers off and kept him fresh for today. He was more relaxed today, tried hard and raced very good. Last time he was bumped the beginning and then we tried to chase the winner and he got a bit keen,” Leung said of his distant fourth behind yesterday’s runner-up in the G3 National Day Cup Handicap (1000m) on 1 October.

“I hope so,” Leung said when asked whether the Hong Kong Sprint might be on his agenda, “I’m sure he will run there”.

Karis Teetan, who rode the runner-up Computer Patch (117lb), was not discouraged by the performance of the lightly raced four-year-old who may also be December bound.

“He got to the front without doing much work but he was very green in front in the straight. I think if a horse came next to him it would have encouraged him to go. He was by himself and got a bit lost to be honest. He never stopped. He did everything right. I just thought the way the race was run, I would have liked something to have gone with him earlier,” Teetan said.

By Leo Schlink
In her wildest dreams, Hollie Doyle could not have dared to hope for a more spectacular year after a season of staggering achievements, but the English rider hopes to crown a wondrous 2020 with more success in the LONGINES International Jockeys’ Championship at Happy Valley next Wednesday (9 December).

By Declan Schuster
Caspar Fownes could have the strongest hand of any trainer in January’s Hong Kong Classic Mile as smart four-year-olds Sky Darci and Enrich Delight came to the fore at Sha Tin this afternoon (Sunday, 29 November).