Purton tops the charts with a Happy Valley double 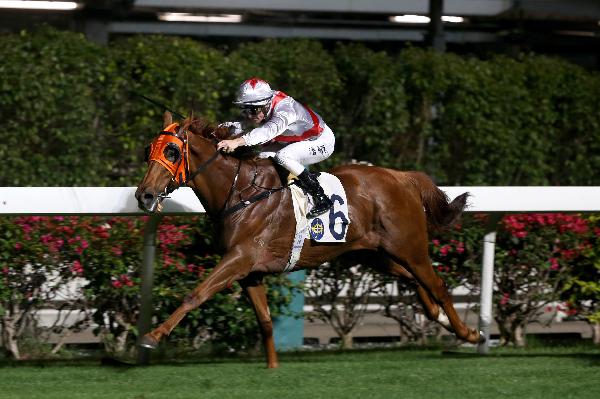 By David Morgan
<
It’s taken 52 race meetings but a Zac Purton double at Happy Valley tonight (25 March) meant the champion jockey poked his nose into the lead in the title race for the first time since late September.

The Australian ace arrived at the city-side venue one win behind his great rival Joao Moreira. At Sha Tin on Sunday, Purton outpointed the Brazilian by three wins to two.

The championship race seems set for a ding-dong battle through to the season’s final meeting at the Valley on 15 July.

“It looks that way but we’ll just see what happens, it’s going to come down to which of us gets the better support — that’ll be the decisive factor,” Purton said.

Jolly Honour (124lb) capped a race-to-race brace for the rider and pushed him to 90 wins over Moreira’s 89. The Me Tsui-trained galloper hit the front 250m out in the Class 3 Po Chong Wan Handicap (1650m) and held the late drive of Naboo Star (124lb) by three-quarters of a length.

“He got a nice position and travelled well the whole race,” Purton said. “He got left in front a little earlier than I wanted but that’s just the way the race unfolded — I think there’s more there.”

The three-time champ enjoyed a cosier win one race prior when the John Moore-trained Shouson took section two of the Class 3 Kong Sin Wan Handicap (1200m) by two and a half lengths.

“He travelled well into the race and did it nicely but really everything just happened perfectly for him,” Purton said. 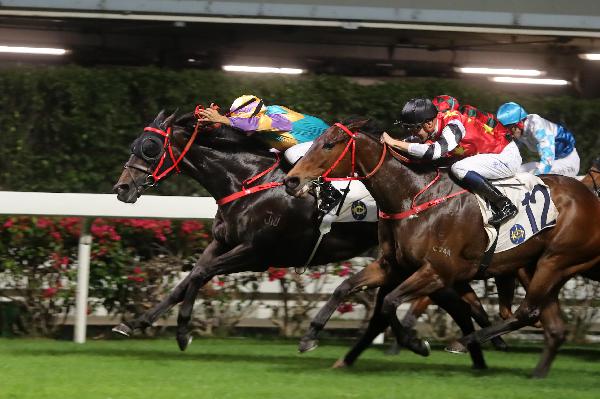 Purton and Moreira are well clear of the rest of the jockeys’ pack but a fascinating secondary battle is taking shape after Grant van Niekerk bagged a hat-trick.

The South African has struck a rich seam of success lately, and, with his trio arriving on the back of a brace at Sha Tin last weekend, the South African is accelerating into a three-way race for third place in this season’s premiership.

Karis Teetan currently holds the coveted third spot with 50 wins, ahead of Vincent Ho’s 45, while Van Niekerk is now on 37.

“Vincent and Karis are two very good riders so I’ll just take it as it comes; they are in sight and I’ll be trying hard to get third place — it’s not an easy task but when you get support here it’s not impossible,” Van Niekerk said.

The rider opened his night’s account on the Douglas Whyte-trained Best Alliance in section two of the Tin Wan Handicap (1650m), and that first success on a Whyte stable galloper was his personal pick.

“Douglas is an iconic person — growing up around racing people in South Africa you always hear the name Douglas Whyte, so riding my first winner for him in Hong Kong is something special and close to my heart. Obviously, I’ve been trying for a couple of meetings to get that first winner for him so it’s really special for me,” he said.

Van Niekerk made an early race-winning move on Best Alliance as he urged the top-weight from eighth with 900m remaining to grasp the lead at the 700m mark; the five-year-old kicked on at the turn for home and held off his closing pursuers by a length and a quarter.

“If you get horses with chances, and you get the results, you naturally get confidence. I’m getting the results and that confidence is building, so hopefully I can keep getting support,” he said.

But the in-form hoop left the track with a sting of a three-meeting suspension (15- 23 April) and HK$120,000 fine for a charge of careless riding aboard Best Alliance.

Neil Callan had to get tough with Super Lucky to come out on top in a tight finish to the Class 4 Shek Pai Wan Handicap (1200m). The Caspar Fownes-trained six-year-old emerged from a pocket to score by a head.

Matthew Chadwick took the finale, section one of the Class 3 Kong Sin Wan Handicap (1200m), on the Danny Shum-trained Winning Method. The three-year-old finished strongly to score by a length and a quarter.

Jockey Chad Schofield and trainer Chris So combined for their first win together since 8 September, thanks to the success of Wonderful Tiger in the opener, the Class 5 Waterfall Bay Handicap (1650m).