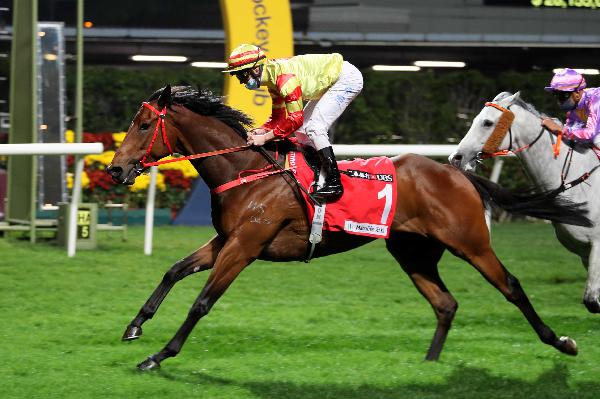 With a handicap rating of 80, the proven city circuit performer could advance aspirations for the 21 March Derby (2000m) with a third successive win as Size continues a familiar mid-season surge – and with Excellent Proposal, Lucky Express and Silver Express already prominent among established Derby contenders.

Zac Purton retains the Savaquin ride with Joao Moreira suspended and is upbeat over the son of Savabeel’s prospects at Happy Valley.

“He’s obviously a horse that’s improving, he’s drawn a bit awkward (in gate 10 of 12) again, hopefully it’s just an evenly-run race and we get our chance,” Purton said.

Asked if Savaquin appealed as a likely Derby candidate, the reigning champion jockey said: “Possibly, he gives the impression that he can run the distance.

“That’s a big asset, so I’ll let the connections work that one out.”

Trailing Moreira 95-65 in the 2020/21 jockeys’ title, Purton is grateful to be combining with Size, who leads the trainers’ championship 47-46 over Caspar Fownes.

“Obviously when the circumstances are there and permit, of course, every jockey would like to ride for him (Size) and I’m no different,” Purton said.

“It’s nice to have the support and hopefully I can get some more.”

“I think he’s had excuses at all three starts before I got on him and last start we were able to get a nice run in transit and there were really no excuses for the horse - he performed well (finishing fourth to Decisive Action over 1600m at Sha Tin on 14 February),” Shinn said.

“He was a little bit green in the straight but aside from that, he ran a creditable race.

“He’s quite a big horse and he’s still learning how to use himself in terms of his action and how to put his feet down but I like the feel he gives me – I think he’s a progressive horse and he’s going to win his share of races in Hong Kong.

“Hopefully he can do that tomorrow night (but) he’s drawn awkwardly (10) and it’s his first run around Happy Valley so it is going to be interesting for the horse. He’s going to need a good ride from myself and he’s going to need the cards to fall our way.

“It’s an even field and I think he’s one of the chances and certainly capable of winning.”

“Probably the drop in grade certainly helped him, but he was pretty dominant in the end, so he goes up in class,” O’Sullivan said of the gelding’s last-start success in Class 5.

“Wednesday night is going to answer a lot of those questions, but hopefully he can. He’s going to get the right run from the barrier.

Spontaneous (127lb), who runs in the second section of Class 4 Matheson Handicap (1200m) is another of the New Zealander trainer’s in-form squad, having overcome a serious leg injury.

“He had quite a bad tendon injury and the owner has been very patient,” O’Sullivan said.

“He’s got a good constitution - he’s sound at the moment and barrier six is neither wide nor in and if he can fly the lids and take up a good position, he should be competitive again.”