Season 2020/21, milestones and the emergence of a new hero 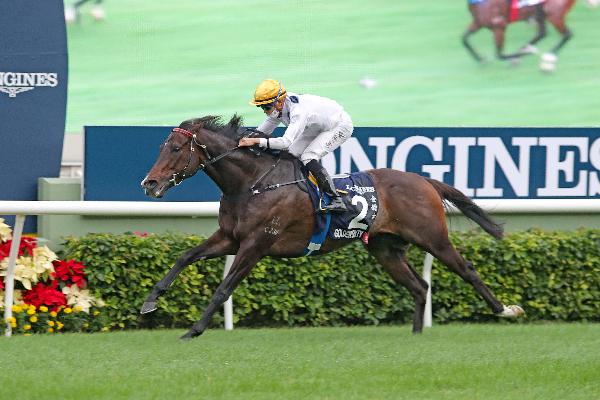 By Declan Schuster
The first half of the 2020/21 Hong Kong racing season is in the bag, 44 race meetings to be exact, crammed with milestones and magic moments, as well as the emergence of a new equine monarch, the brilliant Golden Sixty.

Golden Sixty - with his brilliant turn of foot and incredible closing speed - has emerged this season as Hong Kong racing’s new hero.

Picking up exactly where he left off (unbeaten) last season, the 131-rater has extended his streak to 12 wins and firmly has Silent Witness’ record of 17 consecutive wins in his sights after capping his golden run of consecutive triumphs with back-to-back Group 1 scores, claiming December’s LONGINES Hong Kong Mile (1600m) and last month’s Stewards’ Cup (1600m).

A treble on Sunday, 13 September at Sha Tin for Karis Teetan included the milestone of his 400th win in Hong Kong and, he brought up the landmark success aboard dirt specialist and familiar ally Will Power.

“It’s been a pleasure to work with all of the trainers, owners and everyone involved — I’m really enjoying it and I just hope it keeps rolling,” Teetan said.

Current championship leading jockey Joao Moreira earlier extended his lead at the top to 14 wins with a superb six-timer at Sha Tin on Sunday, 20 September.

“I just hope that I can keep it up — it’s not going to be an easy season,” Moreira said.

He’s kept it up the pace alright, the Brazilian has a 27-win lead at the top, boasting an impressive 23.56% win strike rate as he marches toward yet another incredible season.

Only 11 days before Golden Sixty’s subsequent win in the 2020 G1 LONGINES Hong Kong Mile, trainer Francis Lui brought up a significant milestone of his own with his 700th Hong Kong win at Happy Valley on Wednesday, 2 December.

Lui was first licensed for the 1996/97 season and ended last term with a personal best 63 wins, which included a clean-sweep of the Four-Year-Old Classic Series with Golden Sixty, and this term he currently has 34 wins.

Zac Purton claimed his second LONGINES International Jockeys’ Championship on Wednesday, 9 December at Happy Valley after clinching a tense contest from Joao Moreira in a dramatic finale to the four-race spectacular.

Tied with Moreira on 18 points heading into the deciding race of the contest, Purton collected an invaluable two after dead-heating for third aboard Flying Bonus with Wind N Grass.

“In a competition like this when there’s so much on the line, it certainly feels nice to have won it again, it’s another moment that I’ll cherish,” he said.

On the evening, Purton also became only the second jockey to reach the 1200-win milestone in Hong Kong. Record-holder Douglas Whyte (1813) is the other.

“Today, the race worked out nicely for him, he’s beaten a really solid yardstick in Exultant. He (Exultant) always seems to consistently perform to the same level and never seems to run a bad race around here,” Moore said.

Moore and O’Brien previously combined with Highland Reel in 2015 and 2017 to win the Vase.

Danon Smash followed in the footsteps of his sire Lord Kanaloa with a thrilling victory for Japan in the 2020 G1 LONGINES Hong Kong Sprint (1200m), their third in the HK$22 million contest’s 21-year history.

Purton, 38, gained the ride on the grey after Christophe Soumillon was forced to forfeit the mount after failing to secure an unconditional release from quarantine following a COVID-19 test on the Thursday before the race.

Purton was jubilant after breaking the Hong Kong International Races’ tie he had shared with Frenchman Gerard Mosse.

“It’s something I’m very proud of, it’s a great achievement,” he said.

Joao Moreira’s glittering career claimed yet another milestone with the Brazilian becoming only the third jockey in history to notch 1000 winners in Hong Kong.

The ‘Magic Man’ reached the mark when John Size’s Incanto Prepared capped a double for the 37-year-old at Happy Valley on Wednesday, 23 December, 2020.

“I can only describe it as a dream come true because I never dreamed that, to be honest, and I would never think that I could get to that mark in Hong Kong, knowing the place is such a tough place,” Moreira said.

Only Douglas Whyte (1813) and Zac Purton (1229) have posted more victories in the world’s most competitive racing jurisdiction.

Elated after the win of Baby Storm, Ho reflected on the peaks and troughs of a career which includes producing elite performers, contesting a Melbourne Cup and also the challenges of competing against much larger yards.

“I learnt so much from Mr Medici (his 2010 Melbourne Cup runner),” Ho said. “Hong Kong racing is the best and I’ve learned a lot here. Thank you to the Jockey Club for giving me the chance, the opportunities to learn from everybody, to learn from owners, learn from horses.

“Everybody goes through the good times, the bad times,” he said. “I have to keep working — I enjoy my work.

That was the call heard around the world, Mark McNamara coining an unforgettable phrase of a beloved grey who captured his first G1.

Hot King Prawn, a consistent son of Denman had previously recorded three wins at G2 level but couldn’t crack it at the top-level, finally at his 23rd start, a blistering run down the centre of the track under Joao Moreira rewarded him in the G1 Centenary Sprint Cup.

Blake Shinn has described his time in Hong Kong as ‘testing’ but on Sunday, 24 January at Sha Tin, the Australian landed a confidence boosting win in the first leg of the Four-Year-Old Classic Series, the HK$12 million Hong Kong Classic Mile aboard 22/1 chance Excellent Proposal for 11-time champion trainer John Size.

“Honestly it’s really gratifying, it’s been a testing time since I have been in Hong Kong but I’ve just had to remain positive and keep believing in myself,” Shinn said.

Bring on the next 44 race meetings.