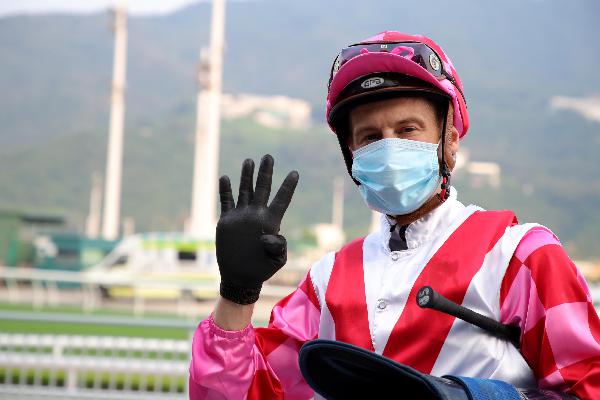 Looking to scale next month’s G1 LONGINES Hong Kong Sprint (1200m) with Sky Field, Shinn is expectant of an improved effort from the gifted chestnut when he tackles this weekend’s HK$4.75 million dash.

“Obviously he had excuses last time - take him on face value because that first-up run with 133 pounds on his back is difficult - we’re now back to a bit more of a level playing field where he drops 10 pounds and he’s a classy horse who I think presents well to run a good race,” Shinn said.

Ridden close to the speed last start, the Deep Field gelding faded to 10th in the G2 Premier Bowl Handicap (1200m) after producing a superb first-up effort to finish second down the straight to Super Wealthy — his first attempt at Sha Tin’s five-furlong straight.

“He was disadvantaged first-up and second-up he had excuses — one was being ridden too close to the speed last time out, so we’ll just go back to his normal pattern and if he runs anywhere near his best he should go close, I think,” Shinn said.

A five-time winner from 16 runs in Hong Kong, the five-year-old trained by Caspar Fownes capped a consistent season last term with victory in the G3 Premier Cup Handicap (1400m).

“I just spoke to Douglas (Whyte) and he offered me the ride on the horse - I’m just grateful for the opportunity,” Shinn said.

He’s since returned this campaign as a gelding for two runs, finishing seventh and sixth over 1400m and 1600m, respectively.

“You just have to look at his run in the Derby, the testing material is Panfield from the race and there wasn’t much between the two horses at that distance and he’s had two nice lead-up runs into the race,” Shinn described.

Before import, the gelding’s biggest win came in the 2020 G3 Hampton Court Stakes (1993m) at Royal Ascot. He finished seventh in the G1 Derby Stakes (2405m) at Epsom behind his then stablemate Serpentine.

“It’s a small but quality field - my horse (Russian Emperor) presents well and should run a nice race,” Shinn said.