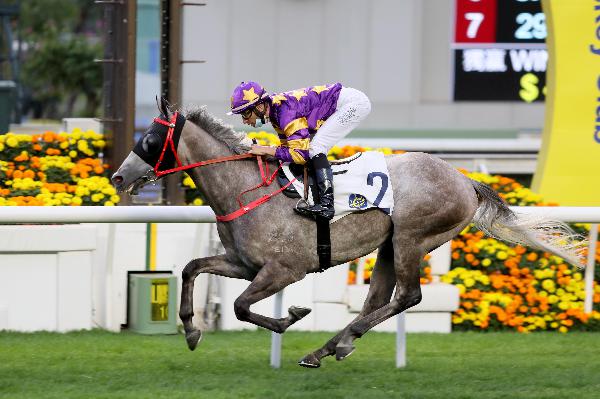 Committed to partner Caspar Fownes’ Sky Darci in the 21 March feature, Moreira did little to disguise his admiration for the Canford Cliffs gelding after he demolished 13 rivals by leading virtually all the way in 1m 21.18s – well inside class and distance standard.

Crossing the line two and a quarter lengths ahead of Uncle Steve (131lb) and Pure Legend (116lb), Silver Express (133lb) will earn a vital rise in the handicap ratings as he atoned for a wayward second at his previous start by coursing truly in blinkers for the first time.

The emphatic nature of the performance – coupled with the open nature of this year’s Derby – prompted Moreira to suggest John Size’s lightly-raced galloper could rapidly emerge as a Classic contender.

“It’s hard for me to say right now (if he’s a Derby horse), but he deserves a chance - who knows if he can make it there,” the Brazilian said after completing a double.

“Maybe John is going to run him again soon to try to give him a chance and the way he won today, even if he goes up in class, he should be competitive once again.

“If he wins again, he deserves buying a ticket for himself into the Derby because what else could you ask for a horse to be put in there?

“There is nothing jumping out of the page for the Derby - it seems very open and who knows, he could be the one jumping out and making it very interesting.”

Moreira was aware of the grey’s antics at his previous start when he threw away certain victory by racing waywardly, but there were no problems with the addition of head gear.

“Of course, we were a bit worried about him doing what he did last time again,” Moreira said.

“All we had in mind was to make sure that we don’t upset him and the hope today was that he was tractable – and he was.

“He was kind - he didn’t make my job hard at all today, it’s a great training achievement.”

The success delivered the final leg of a treble for Size, who overtook Caspar Fownes in the training championship to lead 47-46.

Vincy’s upset win in the Class 3 Tai Po Kau Handicap (1800m) sabotaged the Derby hopes of Charity Fun, who needed to win to earn a ratings rise to have a chance of being selected.

A winner of two of three starts in Ireland in 2017, Vincy – now seven – arrived in Hong Kong burdened with much expectation but, until Sunday’s breakthrough success, had posted seven seconds and a third.

“He came to Hong Kong with a bit of a reputation and I’ve only had him for a short while, albeit enough to learn a lot about him,” Whyte said.

“He certainly works a lot better in the mornings and he’s indicated that he can do that (perform to his best) when he wants to.

“Today, everything went right and he got a beautiful pace - he was led into the race and only had to run home 400m - that’s what he did.

“The winning move was the way Tony (Piccone) rode him,” Whyte said.

Francis Lui is accustomed to the pressures of expectation through the deeds of stable star Golden Sixty, but he was pleasantly taken by surprise with the victory of Highly Proactive in the Class 2 Lam Tsuen Handicap (1400m).

The Coats Choice gelding held off Californiadeepshot in a desperate finish under Karis Teetan – to Lui’s delight.

“There are no plans for him – just stay in this grade and see if he can win again.”

“He’s still learning and he’s doesn’t know 100 percent what he’s doing yet - he showed his talent in the trials and obviously trialling alongside Hot King Prawn the other day became a bit of a talking point.

“He’s still very much a work in progress and hopefully he’ll continue to take benefit out of that.”

“He’s got the quality but he had a very bad tendon,” Chang said. “Since he came to my stable, I would say he is nearly 100 percent (sound).