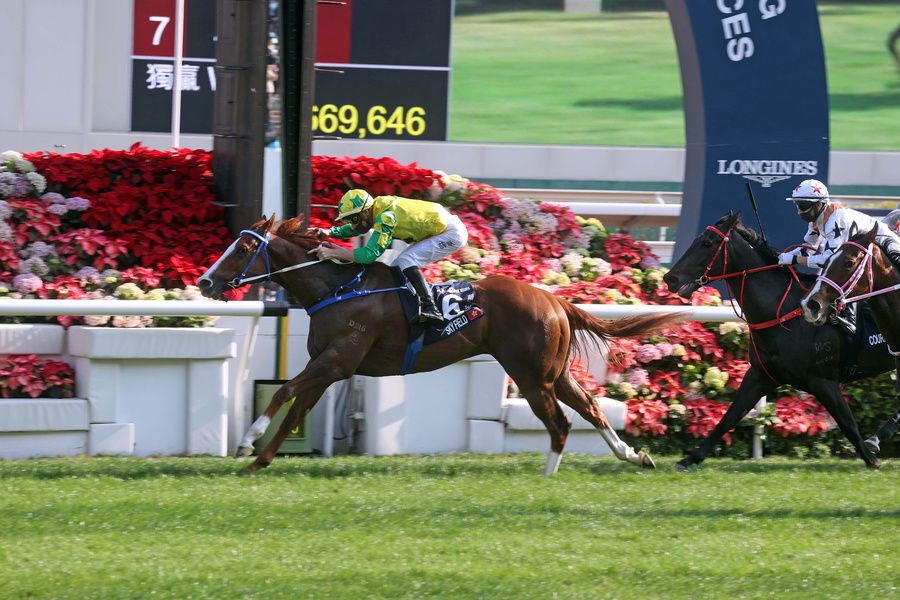 By Leo Schlink
Caspar Fownes and Blake Shinn were left with conflicting emotions after Sky Field steamed to success in the HK$24 million G1 LONGINES Hong Kong Sprint (1200m), fending off world-class opposition from Japan to continue Hong Kong’s dominance in the event.

Shinn and Sky Field avoided the incident before staving off Resistencia (Christophe Soumillon) by three-quarters of a length in 1m 08.66s. Courier Wonder (Joao Moreira) was third, one and a half lengths from the winner.

Shinn’s faith in Sky Field, a son of Deep Field, was rewarded on the highest stage and came three seasons into the Australian’s Hong Kong stint.

“I have mixed emotions for winning this race today. Obviously, the first emotion is that my feelings are with the fallen jockeys and horses out there,” said the quietly-spoken Australian said.

“It’s gut-wrenching for any rider to see a horse go down. What’s happened today, it’s a real bitter-sweet win and in a way it’s a hard win to take in the circumstances.

“All credit to Caspar Fownes, he’s given me the opportunity to ride this lovely animal over the previous season and this season.

“We’ve always had faith in him but on the big stage things haven’t always gone this way. Today, he performed to his best today and still beat a handy horse in chasing down a top-line horse in Courier Wonder and the Japanese horse (Resistencia).

“He’s a great horse and hopefully he can keep going forward.”

Fownes, 54, has built a strong alliance with Shin, who struggled initially to cope with the demands of Hong Kong racing.

“Definitely watching the run live, it was nasty and we've got mixed emotions there,” Fownes said. “One hand you’ve got a horse that is trucking along at the same time in your mind you're thinking about 'I hope the boys are alright and the horses'.

“It was nice to get that result with that particular horse, especially for Blake - he's been riding really well and again today another good performance, so well deserved.

“I've said it for a while that he's (Sky Field) pretty special and I think he's got his best racing ahead of him. We've got something really nice to work with and it's nice to see him do that today”

Soumillon, who finished third in the LONGINES Hong Kong Vase (2400m) on Ebaiyra, had to be content with another minor placing at the highest level.

“The filly (Resistencia) ran well. Unfortunately, we had a bad movement in the turn. I had to shift in to run away from the fallen horses,” the Belgian champion said.

“The winner pushed me out in the straight. She gave me a very good effort. It nearly looks a bit short for her today. I think over 1400m, she will be even better.”

Damian Lane, who rode Computer Patch into sixth place, said: “He tried hard, he had a little bit of pressure early but travelled well mid-race. He just couldn’t quite sprint with the winner at the end.”