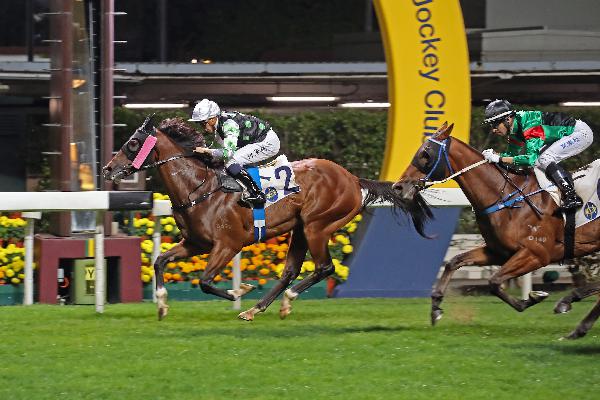 The five-year-old contests a hot edition of the Class 2 Hing Man Handicap (1000m) aiming to become only the 13th horse this season to have won three or more consecutive races.

Trainer Francis Lui knows a thing or two about delivering multiple win streaks, with three of his stable having bagged at least a three-timer already this season: More Than This and Fortune Happiness have both completed hat-tricks, while Golden Sixty sealed a magnificent seven in a row and a Four-Year-Old Classic Series clean sweep when winning the BMW Hong Kong Derby last month.&nbsp;

Lui, though, believes This Is Class faces a stiffer test than he did in his most recent two wins.

“It’s hard to say how much improvement he has left to come but he’s such an honest horse.”

The So You Think gelding has enjoyed a rapid rise since his first start at the Valley in March 2019, after putting four unplaced efforts behind him at Sha Tin. He has rocketed 35 points up the ratings since that venue switch six runs ago, each time with Vincent Ho, who retains the ride.

“His form is good but unfortunately there are no 1200-metre races for him coming up, so that’s why we’re running him over 1000 (metres) and, as well, draw 10 doesn’t make things easy,” Ho said.

Lui and Ho have been formidable with 20 wins together this season and they have two chances to build on that tally this Wednesday.

“This Is Class was sort of switching off over the closing stages but still he won well because he led all-the-way and most of the winners that night came from the back of the field. It wasn’t easy for him to do that,” Ho said.

“He pulled up really well out of that run and his form is still good so we’re still a bit confident, it’s just the drop back in distance and also breaking from gate 10, as well he is up in class and there are a few experienced horses in the race too so it won’t be as easy.”

Fresh off a G2 score on Sunday in the Sprint Cup aboard Voyage Warrior, Ho is aiming to better his 47 wins this term as he nips at the heels of Karis Teetan (54 wins) for the premiership’s third place.

“I was surprised, the rain probably helped Voyage Warrior and for sure he is also fit - so we were lucky it rained and as a frontrunner it helped him,” Ho said.

While This Is Class will aim to better his record tomorrow night, another Lui trainee, Holy Heart (133lb) will look to break his Hong Kong maiden in the race prior, the Class 3 Oi Tung Handicap (1650m). He will face Flash Famous (126lb), another attempting to nail a third win on the bounce.

“Holy Heart is a little bit cheeky, you can see last time when he hit the front he turned his head and looked around, but he’s lucky because he has a good draw, which can help him this time,” Lui said.

The Holy Roman Emperor gelding was a two-time winner on the Polytrack pre-import when previously under the care of four-time British champion trainer John Gosden.

“Zac (Purton) knows him well - he has had that experience riding him as he rode him last time - so he can handle him,” Lui said.

The Me Tsui-trained Very Sweet Orange is already in the multiple consecutive wins club this term and is aiming to make it four in a row in the Class 3 Hing Wah Handicap (1000m).

“We have a good draw and this time Alfred Chan is back on with his seven-pound claim, which will help a lot,” Tsui said.

Chan rode the Exceed And Excel gelding to the first two of his three recent wins and hops back in the plate for Wednesday’s test after Brazilian jockey Vagner Borges bagged his first Hong Kong win on the gelding last start.

“He’s a pretty straightforward horse, he has natural gate speed and even if he’s drawn wide he still tends to have enough speed to cross and find the rail but with gate three tomorrow night it will be a big help for him,” Chan said.

Chan is looking to remain unbeaten aboard the gelding this term with a third win.

“I first sat on him last season but then this season I rode him in a trial at Conghua and he wasn’t fit then but he ran well. Since I first won him he’s just kept improving,” Chan said.

The 25-year-old apprentice has 12 wins this term, three of which have come at the city circuit.

“I think he’s a Happy Valley horse - I’ve ridden him on the dirt (in barrier trials) before and he didn’t exactly show me much and with his form he’s won most of his races at Happy Valley,” Chan said.

“I hope he finds his own rhythm, hopefully he can run his race on his own in freedom as he’s very close to four consecutive wins, so this race is key and we hope he can continue to go up the ratings,” Tsui said.